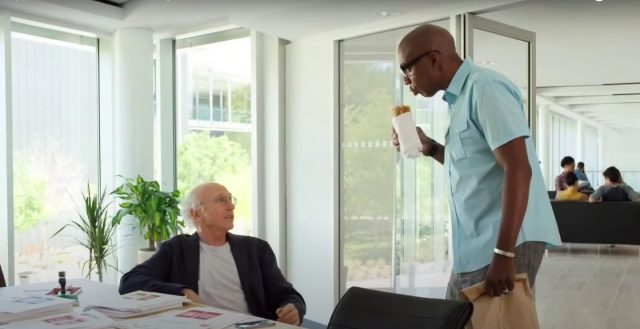 An extensive 10-minute long skit, filmed for WWDC 2014 has recently surfaced thanks to Sam Henri-Gold. As reported by Cult of Mac, Henri-Gold first shared a small clip of the video on Twitter. The leaker wished to protect the party who apparently inadvertently released the full cut of the video.

That said, the video in its entirety can be seen on YouTube below.

Turning towards the video itself, it’s a rather cheeky, albeit long skit. Larry David, best known for his work on ‘Seinfield’ and ‘Curb Your Enthusiasm’, can be seen interacting with comedian J.B. Smoove even the CEO of Snap Evan Spiegel. It’s likely that the skit was shot as an intro to WWDC 2014. However, while a 10-minute long video may be excessive for an intro, the video could have been released online as a standalone piece.

There’s no word on why Apple pulled to project ahead of WWDC 2014. Apple replaced the Larry David skit with a video showcasing various developers talking about their experience developing. Perhaps Apple wanted something a bit more buttoned-up and serious.

At the end of the day, new Larry David content is always a win in my book. I’m sure many of us didn’t have this on our 2021 bingo card sheet. If you did, kudos.

Fresh off the heels of the launch of Apple's HomePod (2nd-Gen), TF International Securities' Apple analyst Ming-Chi Kuo believes a successor to the HomePod mini 2 could be on its way. In a tweet thread surrounding Apple supplier Goertek, Kuo discussed that the Weifang-based components company has "secured NPI and assembly orders" for the ‌HomePod mini‌...
Steve Vegvari
10 hours ago