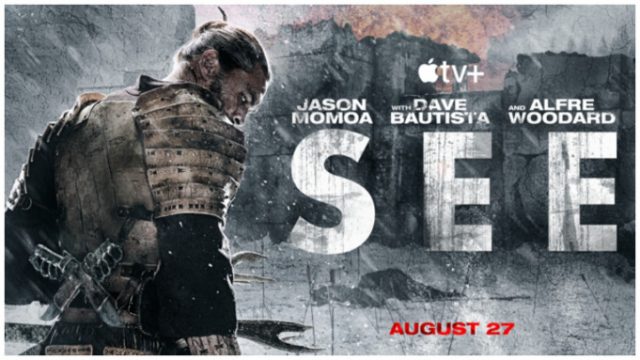 Apple has now announced that the second season of ‘See’ will premiere on the streaming service on August 27th. Additionally, the Apple TV+ Series ‘See’, which stars Jason Momoa has been renewed for a third season ahead of the premiere of the sophomore season.

The second season of ‘See’ will see Jason Momoa return to the role of Baba Voss. The season will unfold on a weekly basis on the Friday of each week, concluding on October 15th. This season will also see the introduction of ‘Guardians of the Galaxy’ star Dave Bautista.

‘See’ is set in a post-apocalyptic world where humanity has lost its sense of sight. Revolving around inner politics and war, the series is largely based around Momoa’s Baba Voss and his bid to protect his family. Bautista joins the series as Voss’ brother Edo Voss. Alfre Woodard will also return in the second season. Additional regular cast members have also been announced. They include Eden Epstein, Tom Mison, Hoon Lee, Olivia Cheng, David Hewlett and Tamara Tunie. The Apple TV+ series has also brought on many cast and crew members who are blind or have low vision.

As reported by Deadline, the announcement that a third season of the show was in production was made during Momoa’s appearance on ‘The Tonight Show Starring Jimmy Fallon‘. The third season is already in production in Toronto, Ontario. The first season premiered in 2019. Production for the second season was delayed due to the pandemic. According to the report, Apple chose to shoot season two and third back-to-back and the renewal was set quite some time ago.

Season two of ‘See’ is executive produced by Steven Knight and Francis Lawrence, alongside Peter Chernin, Jenno Topping, Jim Rowe and Jonathan Tropper. The series is produced by Chernin Entertainment and Endeavor Content.