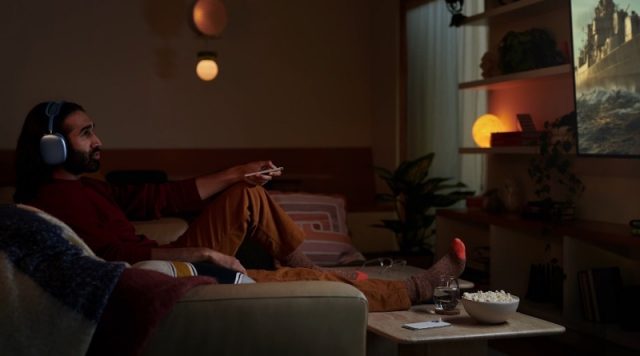 Apple has been putting a lot of focus on Spatial Audio, especially with its recent integration into Apple Music alongside Dolby Atmos support. During Apple’s Worldwide Developer’s Conference (WWDC) keynote, Apple discussed how a future tvOS and macOS update will enable users to use their AirPods and AirPods Max to utilize Spacial Audio.

At the time, Apple didn’t disclose how the feature would be integrated into the devices. Though, Apple has finally begun to discuss how it will make that possible. While speaking with Engadget, Apple talked about how the feature will work and integrate with content that is available in 5.1, 7.1, and Dolby Atmos.

According to Apple, when a user is wearing a pair of AirPods or AirPods Max, the software will widen the soundstage in order to make it feel like the room you are viewing the content in is filling with sound. As the viewer is sitting down and watching a show or movie, the head tracking feature will lock in after the user has remained in the same position for some time. If the viewer gets up, the head tracking feature will recalibrate.

Apple has also said that the process in which you connect a pair of AirPods or AirPods Max to Apple TV is a streamlined process. If the wireless earbuds or headset is near the device, Apple TV will display a popup for the user to quickly connect the two devices. The tethering process can all be done without navigating through the settings.

Additionally, Apple discussed how the future iOS 15 updates will also integrate new Spatial Audio controls. This fall, an additional feature to the AirPods will include a ‘Conversation Boost’ feature. This feature will seek to assist AirPods users who have “mild” hearing issues. Additionally, an ‘Announce Notification’ feature will be implemented, in which high-priority notifications will be read out loud to AirPods users.

Following an extensive ordeal, the lockdown at Foxconn's 'iPhone City' Zhengzhou plant has now ended. Though, it's being reported that the disruptions in production are costing Apple an estimated $1 billion USD per week. Foxconn's Zhengzhou plant is Apple's largest iPhone manufacturing facility. In charge of producing the iPhone 14 Pro and iPhone 14 Pro...
Steve Vegvari
12 hours ago