Thousands Of Locals Line Up To Celebrate Shenzhen Apple Store Opening, Knowing It Has No iPhone 5 Or iPad Mini [VIDEO]

According to a report published today by MIC Gadget, thousands of locals lined up outside the new Shenzhen Apple Store to celebrate its grand opening, even though they knew that company’s two most recent products i.e iPhone 5 and iPad Mini, won’t be available at the store. 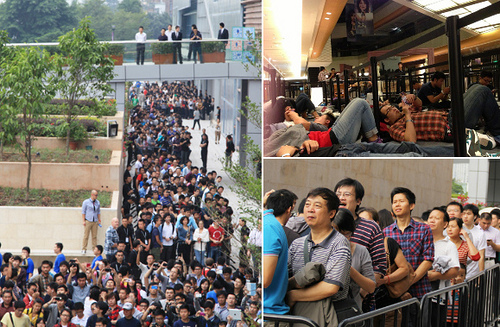 Both the iPhone 5 and iPad Mini still haven’t been officially launched in China. Still, thousands were seen gathering outside the new Apple flagship store in Shenzhen, just to enjoy the atmosphere and celebrate the opening of new Apple Store in the city.

“Only few hundreds of people in the queue were real Apple fans. The rest of them lined up because they thought there were something special giving out for free, while some were just enjoying the celebration’s atmosphere”.

The source has made a video of this grand opening. Take a look: