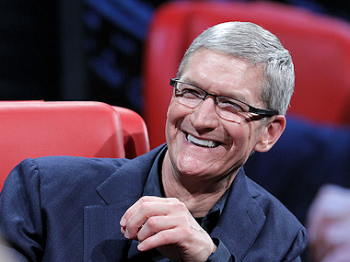 Last year Tim Cook was talking about a record holiday quarter with 37 million iPhones sold, the highest number ever. But this year Apple went even further: 47.8 million units have reached their new owners. Following the reports of this amazing quarter, Tim Cook has emailed a letter of congratulations to employees.


Within the email, Tim Cook thanked employees for their “incredible hard work and focus” and underlined the success of iOS devices: Apple sold a combined 75 million units of iPhones, iPads and iPod Touches in just one quarter.

Just like in 2012, when the company held a Town Hall meeting after announcing their holiday quarter earnings, in the email sent out last night just after the earnings call, Tim Cook asked company employees to attend an employee communication meeting scheduled for today at 10 a.m. PST. He also noted that employees will be able to submit questions via AppleWeb in advance.

You can read Cook’s email below:

Team, We’ve just reported another record setting quarter, thanks to everyone’s incredible hard work and focus. We sold over 75 million iOS devices in the holiday quarter alone, which is a testament to the strength of Apple’s innovation. Please join me for an employee communications meeting tomorrow at 10 a.m. Pacific time in the auditorium of De Anza 3. We’ve created a space on AppleWeb where you can submit your questions in advance, and we’ll do our best to answer as many of them as we can during the meeting. The meeting will be broadcast live throughout Cupertino and at many other Apple locations. Please check AppleWeb for details. Tim

The Apple TV+ original series Shrinking is now available to stream in Canada. Jason Segel and Harrison Ford star in a comedic drama series centred around a therapist that decided to approach his role in a new way by taking the filter off and giving unbridled honesty and advice. Shrinking stars Segel as James Lair,...
Steve Vegvari
9 hours ago