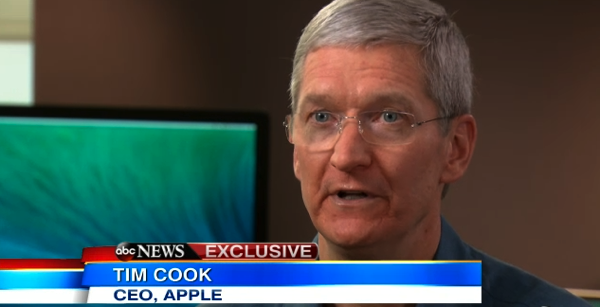 Today is a special day for Apple: 30 years ago on January 24, 1984, the Macintosh was launched. To celebrate that historical moment, Apple has created an inspirational video and a webpage, and the company CEO, Tim Cook, sat down for an interview with ABC News alongside Craig Federighi, Apple’s head of Software Engineering, and Bud Tribble, vice president of Software Technology.

A teaser of the interview appeared Friday morning on Good Morning America. Speaking about the Mac, the reporter, David Muir of ABC News, pointed to Apple’s move to start manufacturing the Mac Pro in the USA. Tim Cook replied by emphasizing the importance of that move, and said they can do more. He highlighted the recent deal with GT Advanced for the Mesa, Arizona facility, where Apple plans to manufacture sapphire glass.

Cook also confirmed that the company will focus on sapphire glass in Arizona, but it remained silent on what Apple’s plans are. As Muir continued to pressure Cook about the potential use of sapphire glass, the CEO joked: “It’s for a ring”.

Tim Cook was referring to the iRing rumour that made waves last year, thanks to Topeka Capital Market analyst Brian White. Back in June, he said that Apple was working on an iRing that allowed users to control a TV set.

You can watch the teaser below, and the full interview will be aired tonight.