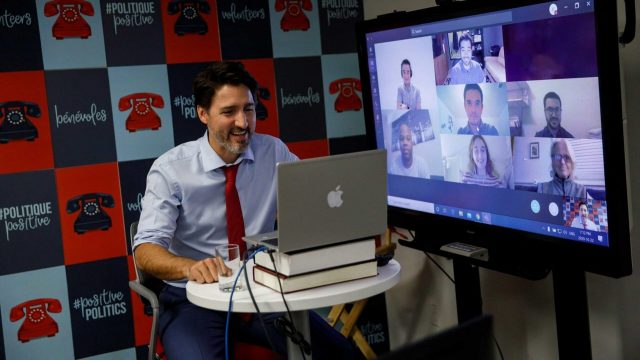 A recent photo of Canadian Prime Minister Justin Trudeau has been circulating and receiving quite the reaction. The photo depicts Trudeau involved in a video training session with volunteering members of the Liberal Party. Trudeau is shown to be smiling and well, using a computer that’s clearly an HP brand with an Apple sticker slapped over the logo.

The premise of having the Prime Minister sit down for a photo op while using a computer that for some reason has been mocked up to looked like an Apple product is funny enough. Naturally, once Toronto Sun‘s Bryan Passifiume shared the photo on Twitter, the internet had a field day with it.

The Apple logo sticker isn’t even on straight, and you can see the laptop’s HP logo underneath #cdnpoli pic.twitter.com/uhO0Zq0Bo3

Does the sticker make the vaccines come faster?

“MOM I WANT A MACBOOK”

“We have a MacBook at home.” https://t.co/mB3xlkakUi

“MOM I WANT A MACBOOK”

“We have a MacBook at home.” https://t.co/mB3xlkakUi

Of course, this isn’t some major scandal where the Prime Minister is pulling one over on everybody. Senior director of communications for the Liberal Party Braeden Caley took to Twitter to state what had happened. In reality, Trudeau was not trying to pull the wool over everyone’s eyes. In fact, the Prime Minister came in and was given the laptop to use in the photo by one of the volunteers.

Nonetheless, seeing the Apple sticker over the HP logo with numerous ports on the side was enough to garner a chuckle. Moreso, the TV display shows a Windows desktop. It’s one of those photos where the longer you look, the funnier it becomes.