Last month, BAI Canada, which runs the wireless network for the Toronto Transit Commission (TTC) in Toronto, created an ad campaign urging riders to “speak up” to Rogers, Telus and Bell for not joining the company’s cell infrastructure.

BAI Canada’s wireless network in the Toronto Subway only has Shaw’s Freedom Mobile signed on as a customer. The ‘Big 3’ have refused to join the network.

Now, BAI Canada appears to be stepping up its campaign by urging riders to create videos urging the Big 3 to join the network.

An email sent by BAI Canada to supporters says, “Thank you for signing the petition advocating for cellular access in the Toronto subway. We believe everyone deserves fair access to connectivity and we’re grateful for your support.”

“Momentum is building. Thousands have already signed the petition, but there’s more work to be done. You can help!”, explains the email. 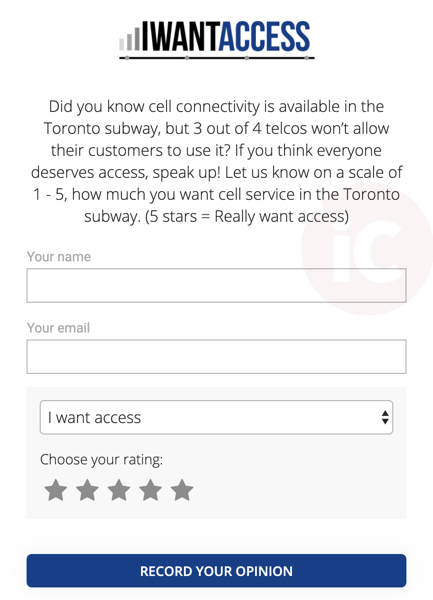 “Did you know cell connectivity is available in the Toronto subway, but 3 out of 4 telcos won’t allow their customers to use it? If you think everyone deserves access, speak up! Let us know on a scale of 1 – 5, how much you want cell service in the Toronto subway. (5 stars = Really want access),” notes the website form.

BAI Canada adds, “Your voice is powerful. Record your opinion and amplify your view by telling the Big 3 why you want access to the subway cell network.”

A link sends supporters to a website allowing them to record a video with their smartphone or computer using the front-facing camera. The website even provides talking points for riders to say on video, such as: “Hi, I’m (first name) and I want access to cell service in the Toronto subway because…”

“All you need is a phone with a camera or a laptop/desktop with a webcam. With a few clicks, you can create and share your video,” says BAI Canada.

Rogers, Telus and Bell want to build out their own wireless network along the TTC, instead of paying for access via BAI Canada. Back in 2012, BAI Canada signed a 20-year deal with the TTC for exclusive access to the Toronto Subway, to install Wi-Fi and cellular connectivity. It doesn’t look like this stalemate will end anytime soon.