Bell and Telus Suffer Wireless Outage in Eastern Canada [u] 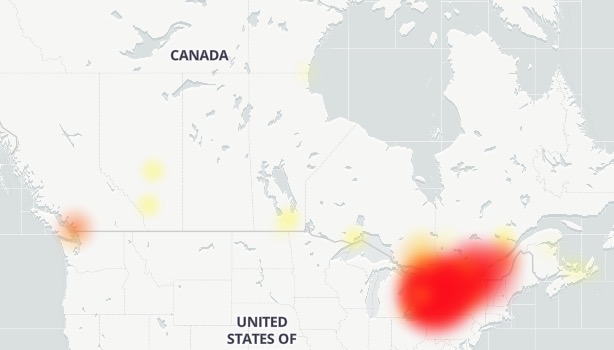 Telus and Bell are dealing with an outage right now affecting customer in eastern Canada. The outage appears to also affect flanker brands of Koodo and Virgin Mobile.

Telus acknowledged the outage, saying “We’re aware of a wireless issue impacting several carriers in Eastern Canada. Our team is already investigating and services will be restored as quickly as possible. Thank you.”

We're aware of a wireless issue impacting several carriers in Eastern Canada. Our team is already investigating and services will be restored as quickly as possible. Thank you.

It looks like the entirety of Bell Canada’s fibre/transport network has gone down.

You’ll hear about this on the national news.

That kind of scale of meltdown.

Other carriers may be impacted.

We’ve reached out to both companies for a statement on the issue, stay tuned for updates.

I have a both Rogers and Bell cell phone. Both networks are down. Eastern Ontario#BellOutage #RogersOutage

Update:. iPhone in Canada has learned Rogers did not have a network outage, but for customers calling into other networks that are down, service may be affected.

Update 10:19AM PDT: A Bell spokesperson told iPhone in Canada in a statement, “Some customers in parts of Eastern Ontario and Québec experienced brief service disruptions earlier today. Service has now been restored. Our team is continuing to investigate the cause.”

Update 11:42AM PDT: A Telus spokesperson told iPhone in Canada, “some of our TELUS customers in a portion of Eastern Ontario and Quebec network may have experienced a brief service disruption earlier today.” The spokesperson said “the situation was quickly resolved, and service is back to normal. We apologize to our customers for the inconvenience and thank them for their understanding.”

Industry, Science and Technology Minister François-Philippe Champagne wants concrete commitments on cellular service affordability from both Rogers and Quebecor before he approves the transfer of Shaw-owned Freedom Mobile's licences to Vidéotron, which will allow Rogers' proposed $26 billion takeover of Shaw to proceed — reports The Globe and Mail. According to the publication's sources, Minister...
Nehal Malik
12 hours ago