The Commissioner for Complaints for Telecommunications Services (CCTS) is set to release their annual report next week detailing complaints Canadians have filed in regards to services related to telecom companies.

The CCTS has shared some early numbers with the CBC, to reveal Bell had the most percentage of complaints by telecom service provider, followed by Rogers, Fido, Virgin Mobile (Bell), Telus and Wind Mobile. 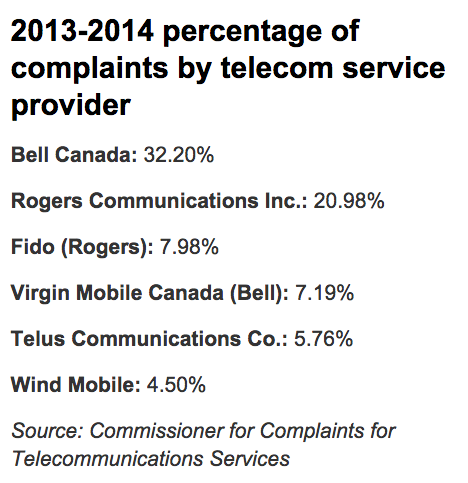 Commissioner Howard Maker said over 75% of complaints—or 12,000—were related to contract and billing related issues:

“I think weak service providers can always do better. We see many complaints in which confusion, misinformation about the terms of the arrangement between the service provider and the customer result in the complaint.

“Clearly, there’s more work to be done on that front.”

The early reveal of numbers come amidst a story where Ontario retiree Patricia D’Croix signed up for a 12-month Bell promo offer last year, but ended up being charged more than what was expected, due to extras part of her TV, internet and telephone package she was unaware of. The CBC article is unclear as to what these specific extras are.

D’Croix said despite the package being advertised as $91.03 per month, bills started coming in at around $300 to over $400 per month. She called customer service but was unable to get assistance, saying “You can’t get anybody. Bell is so huge. I mean it’s Bell Media, Bell this, Bell that. There’s no way to fight them.”

The retiree stopped paying and cancelled her service (and contract) early, that’s when Bell sent her a disconnection notice. Meanwhile, she says a collection agency regularly calls her seeking the missing funds.

If you have a wireless complaint, the CCTS can help you for free, as the organization says its track record of resolving complaints stands at just under 90 per cent.

For example, most carriers require you to provide one month’s notice before cancelling or switching to another carrier, or else they will charge you an extra month. Filing a complaint to the CCTS will enable you to get refunded that month you paid for where you didn’t get service.