The lawsuit seeks damages for the following: breach of privacy, breach of contract and breach of the Telecommunications Act. A similar class action was launched against Bell in Quebec.

“The Relevant Ads Program was a misguided attempt by a Canadian telecommunications company to generate advertising revenue. If allowed to proceed, it constitutes a threat to the core privacy rights of all Canadians,” said Ted Charney of Charney Lawyers. “Through this class action, the plaintiff seeks to hold Bell accountable and stop other providers from selling customers’ personal information without informed consent,” said David Robins of Sutts, Strosberg LLP.

Bell launched their Relevant Ads Program back in October 2013. This month, the Privacy Commissioner of Canada voiced concerns over the program and how it violated privacy rights of Canadians. In response, Bell agreed to cancel the program and delete all existing profiles, while also agreeing to take an opt-in approach for any future ad tracking programs.

This lawsuit seeks the appointment of an expert to oversee and confirm the destruction of the personal information Bell has mined from customers over the past year and half. 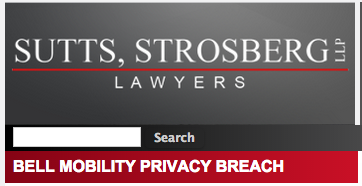 The lawsuit encompasses Bell Mobility and Virgin Mobile of Canada customers who had accounts with a data plan between November 16, 2013 and April 13, 2015. Those looking to register can do so at www.bellmobilityprivacybreach.com.

Bell is no stranger to class action lawsuits against the company. Earlier this year, the company lost a lawsuit over non-existent 911 services in Canada’s three Northern Territories. More recently, the company won a ruling in a $100 million class action which argued expiring prepaid minutes were wrong and should not apply.

Will you be joining in on this class action lawsuit?