Yesterday Industry Minister James Moore announced the Federal Government would launch a new AWS-3 wireless spectrum auction either in late 2014 or early 2015, which would also set aside a 30MHz block reserved for newer wireless entrants for the likes of WIND Mobile or Videotron.

The nature of the spectrum auction and how it aims to increase wireless competition doesn’t sit well with incumbents though, as Bell says they welcome competition–but on a level playing field. Bell Canada spokesman Mark Langton told the Financial Post the set-aside spectrum will be a financial burden for taxpayers:

“We welcome competition, but all competitors new or old should follow the same rules. Spectrum is a valuable national resource and shouldn’t be given to selected companies at a bargain. It’s a cost to taxpayers,”

Stock prices of Rogers, Telus and Bell slipped slightly yesterday after Industry Canada’s announcement. Bank of America Merrill Lynch analyst Glen Campbell changed his ratings for Rogers and Telus from “buy” to “sell” due to the expected increased competition from newer entrants.

Critics of the new wireless policy, such as Terence Corcoran’s recent editorial in the Financial Post, argues having two or three wireless players is more competitive than a four player market:

Fewer firms, however, does not mean less competition. One of the great economic misconceptions in Ottawa is that competition is a function of the number of firms in a market. Two or three wireless firms — now increasingly the norm — may well be more competitive than four, especially if some firms in a four-player market are being cannibalized to support others.

Speaking to The Star Phoenix, SaskTel’s VP of regulatory affairs says the regional carrier may be ineligible to bid on the new spectrum. Why? The set aside spectrum is only available to carriers with less than 10% national and 20% provincial market share; SaskTel has a major presence in Saskatchewan:

John Meldrum, vice-president of regulatory affairs for SaskTel, said the auction may leave the Crown corporation on the sidelines once again.

“We may not get spectrum. We are not eligible to bid on the set-aside spectrum (reserved for new entrants).” Meldrum said four companies, including SaskTel, could potentially compete for 20 MHz of spectrum.

Following yesterday’s announcements, WIND Mobile and consumer groups applauded the Federal Government’s plan, which it sees will foster competition. For WIND Mobile, it will bring the ability to launch an LTE network, which its CEO Tony Lacavera made clear on Twitter yesterday, directing a jab at “Robellus” (Rogers, Bell and Telus):

Head's up Robellus! Govt action today on spectrum is great for competition, ensures we will have access to the spectrum we need for LTE

Below is a graphic of spectrum holdings in Canada, according to data from Industry Canada: 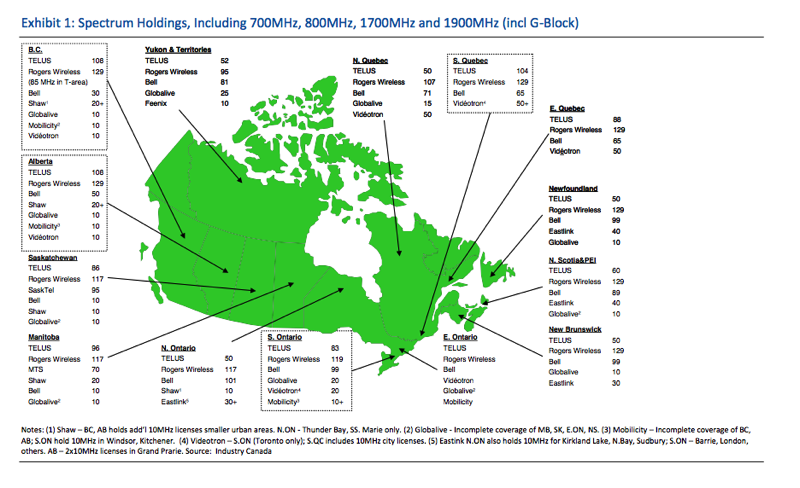 The AWS-3 spectrum auction looks to provide newer wireless entrants a real chance to compete against the Big 3. Will it actually happen? We’ll have to wait and find out.