Update: Bell spokesperson Nathan Gibson has confirmed the $60/10GB plan is not increasing in price. This article has been updated accordingly.

During the holidays back in December, it was a wireless feeding frenzy as everybody and their grandma tried to jump on the $60/10GB promo plan offered by the ‘Big 3’, which was a response to a similar promo offered (and now $50/10GB) by Shaw’s Freedom Mobile.

An email sent out reads as follows:

At Bell, we are committed to giving our customers access to the fastest mobile technology in the world so they can enjoy their mobile devices to the fullest.

In the last year, Bell has invested more than $4 billion in our networks to deliver on that commitment. Recently, Bell was the first wireless provider in Canada to successfully hit Gigabit LTE-Advanced speeds in testing. We have Canada’s best national network, and it keeps getting better.

The improvements in our network are a huge benefit to our customers, who have increased their usage over 30% in the past year. That increased demand, along with price increases from our suppliers, require us to increase our rates for a small number of our products.

To that end, starting on your June bill date for Mobility services, the monthly price of the following plan(s)/feature(s) will be increasing. Your current monthly charges are reflected on your most recent bill. 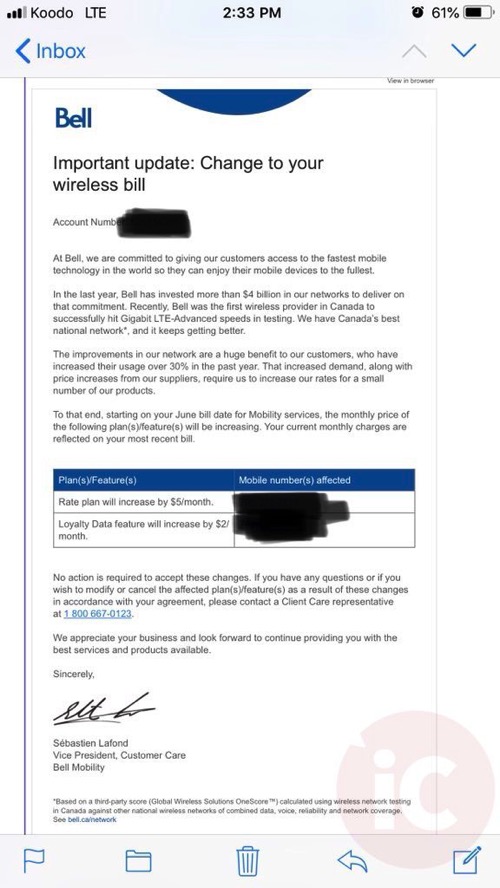 The email says “no action is required to accept these changes,” and concludes to say “we appreciate your business and look forward to continue providing you with the best services and products available.”

According to a couple iPhone in Canada readers, this email was received yesterday and affects their Bell consumer account It also appears Bell is implementing a similar $5 increase to small business plans as well, reports MobileSyrup, also starting in June.

We’ve reached out to Bell for clarification and will update this post once we get more information.

Update 2, April 19, 8:27AM PDT: Bell has again reached out to clarify the price increase is for both small business customers and some consumer accounts.

Anyone else out there receive a similar email regarding a price increase from Bell?