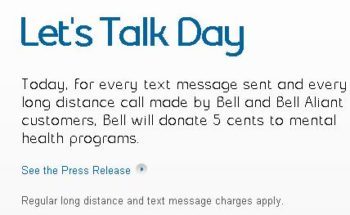 “Thank you Canada! By talking so openly about mental illness and its impact, you’re letting family, friends, neighbours and colleagues who struggle with mental illness know they can talk about it and seek the help they may need,” said Ms. Hughes, Canada’s six-time Olympic medalist. “I’ve heard encouraging stories of hope and opportunity from so many people throughout the Bell Let’s Talk Day campaign. Together, we’ve taken the conversation about mental health to a new level – it’s a conversation that’s not just changing lives, it’s saving lives.”

Are you a Bell customer that participated in yesterday’s Let’s Talk Day?