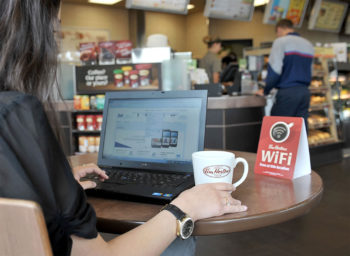 Tim Hortons announced today that they will be installing wireless internet in 2000 of their locations. This will be the largest free wireless network in Canada.

“It’s all about convenience and making life easier for our guests. Free wireless Internet at Tim Hortons will help people stay connected on the road in more locations than anyone in Canada and is yet another great reason to visit one of our restaurants to enjoy a fresh cup of coffee.”

The roll out has begun and by September the chain expects 90 percent of its locations will have wireless access. The Oakville, Ontario based company chose Bell as their service provider after a six month testing process.

Currently Bell also providesWi-Fi service to Chapters, Indigo, Starbucks and select McDonalds location. What are your thoughts on this initiative by Tim Hortons? Will it change your coffee habits?

Bell Media’s streaming service Crave is back with another promo for the holidays, again offering 25% off its top gift card. Last year, Crave offered 25% off its $100 gift card, resulting in customers paying $75, saving a cool $25 off. For 2022, Crave is offering up the same promotion again. You can buy a […]
IIC Deals
18 hours ago