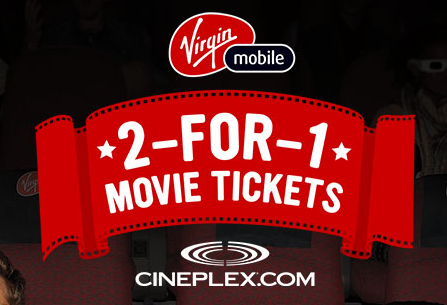 Virgin Mobile has brought back their 2 for 1 Cineplex movie offer due to ‘popular demand’. Essentially you fill out an online form to receive a promo code via text message. The offer works for movies Sunday to Thursday and there’s a limit of one code per member every two weeks.

Here’s how to get your 2 for 1 movie tickets:

1. Head to the 2-FOR-1 landing page at www.virginmobile.ca/Cineplex

2. Fill out the online form with your name, email address and mobile number

3. Look on your phone for the arrival of a free text message with a promo code

4. Hit up www.cineplex.com on your mobile or from a desktop and buy one movie ticket, while entering the promo code. Two tickets will be issued

5. For lost codes, head back to virginmobile.ca/Cineplex to retrieve it