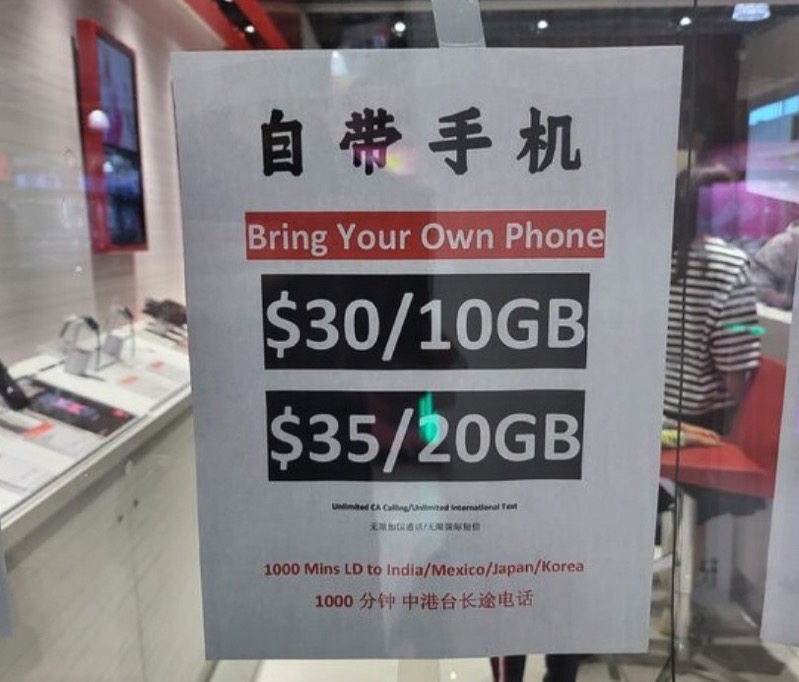 Bell’s flanker brand Virgin Plus is offering up a promotional bring your own phone plans right now at select stores.

The Virgin Plus store at Pacific Mall in Markham, Ontario, has posters advertising $30/10GB and $35/20GB plans, with included 1,000 long distance minutes to India, Mexico, Japan and South Korea. The plans include the usual unlimited nationwide talk and international messaging.

The sign advertising this deal was spotted by a RFD user on Tuesday morning. Now, there’s always a catch when it comes to these special deals.

These plans are eligible for those signing up under a referral to get $50 in credits (which only start from your third billing cycle at $5/month dragged out over 10 months).

The rationale here is to sign up new customers under these limited-time discounted plans, as they will increase back up in price in 10 months. Maybe a customer won’t notice the price bump? But at that time, you could just jump to the next best plan you can find.

Again, call your local Virgin Plus store and ask if they have these special bring your own phone offers, which are available as back-to-school week is in full swing.

[caption id="attachment_382081" align="aligncenter" width="1000"] Image: Bell[/caption] As Hurricane Fiona makes landfall in Atlantic Canada, telecommunications services are more instrumental than ever in ensuring that Canadians can stay connected with their loved ones and emergency services. To that end, Industry Minister François-Philippe Champagne is organizing telecom operators in the impacted areas to "ensure their services are...
Nehal Malik
7 hours ago