The Federal Court of Appeal issued a ruling in favour of the Big Three that could undermine the whole effort for the new Wireless Code, but the Harper government is apparently doing nothing to defend it. The matter captured the media’s attention last week when the ruling was issued, but Industry Canada didn’t comment on the issue. And it also avoided giving a direct answer yesterday in the House of Commons, as spotted by Michael Geist.

The new Wireless Code was enacted in December, and it is scheduled to take effect in mid-2015. It will bring limits to early cancellation fees, data roaming fees, and overage charges. As of December 2013, it applies to all new contracts and all existing contracts that are renewed or extended. Furthermore, it will apply to all wireless contracts starting June 3, 2015, regardless of when they were signed. 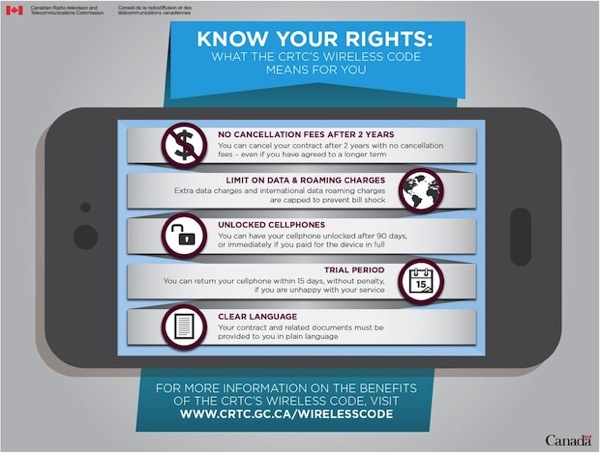 The Big Three have challenged this last part of the CRTC’s Wireless Code, which, by the way, was touted as its own by the Harper government.

The incumbents are obviously looking to limit the CRTC’s power, and they successfully argued in front of the court last week, leaving the Wireless Code defenceless as the court ruled that the CRTC cannot argue on its own behalf — which leads to the question: Where are the federal government’s lawyers?

Mr. Glenn Thibeault (Sudbury, NDP):
Mr. Speaker, while the Conservatives claim credit for the CRTC’s wireless code of conduct as their policy, Canadians continue to be hit in the pocketbook waiting for action. The NDP has been pushing for this code since the beginning, but now, as the code of conduct is being challenged by the big three in court, the current government has simply walked away from it. The Conservatives keep spending millions in advertisement to tell Canadians how great their not-so-original idea is. Why are the Conservatives not putting their efforts into defending the code of conduct instead of boasting about it while it is being struck down?

Mr. Paul Calandra (Parliamentary Secretary to the Prime Minister and for Intergovernmental Affairs, CPC):
Mr. Speaker, of course, this government has done extraordinary work with respect to our telecom policy. In fact, competition has increased. At the same time, wireless rates have come down by 20% while employment in this sector has actually increased by some 25%. That is good news for all Canadians. It is something that has been a priority for us. Putting more money back in the pockets of hard-working Canadians will remain a priority of this government, and we are proud of that.

Ms. Annick Papillon (Québec, NDP):
Mr. Speaker, the Conservatives spent $9 million on promoting a code that they are now refusing to defend. The court ruling in favour of the big three telecommunications companies is a total failure for consumer protection. The government spent millions of dollars on ads to try to reassure consumers. Today, those same Conservatives will pay the price for this ruling. Why is the government refusing to stand up for consumers in court against wireless service providers?

Mr. Paul Calandra (Parliamentary Secretary to the Prime Minister and for Intergovernmental Affairs, CPC):
Mr. Speaker, again, it is just the opposite. This government, of course, has made it a policy to make sure that we do everything we can to actually bring down the cost of wireless to Canadian consumers. We have done that since we have been elected. Unfortunately, the opposition is constantly voting against those measures. As I just said, it is our government’s policies that have brought down the wireless rates for Canadian consumers, while at the same time employment in that sector has increased by 25%. That is good news. We will continue to do that and we will continue to put the focus on putting more money back in the pockets of hard-working Canadians.

By failing to give a direct answer and point to some stats, the government’s position makes us wonder: Who will back the wireless code if the government fails to do so despite touting it as its own wireless policy?

Update: Industry Minister James Moore has requested that the attorney general act as an intervener in the case at the Federal Court of Appeal, Moore’s spokesman Jake Enwright told Reuters on Wednesday.

“We support the CRTC’s decision to apply the Wireless Code retroactively. Our government will intervene in this case on behalf of Canadian wireless consumers to ensure that their voices are heard,” Enwright said.

Update 2, 6:30 PDT: Rogers sent us the following email in response to this article:

At Rogers, we are and have been abiding by the Code for customers who began the service on or after Dec 2, 2013 and will continue to do so. The only aspect of the Code we are challenging is the provision that says that by June 15, 2015, the Code applies to all customers even if they signed  a three year contract before Dec 2, 2013, which would not  expire until after June 1015. We’ve already applied several aspects of the Code to all our customers, including a $100 roaming data cap, device unlocking, and plain language contracts.