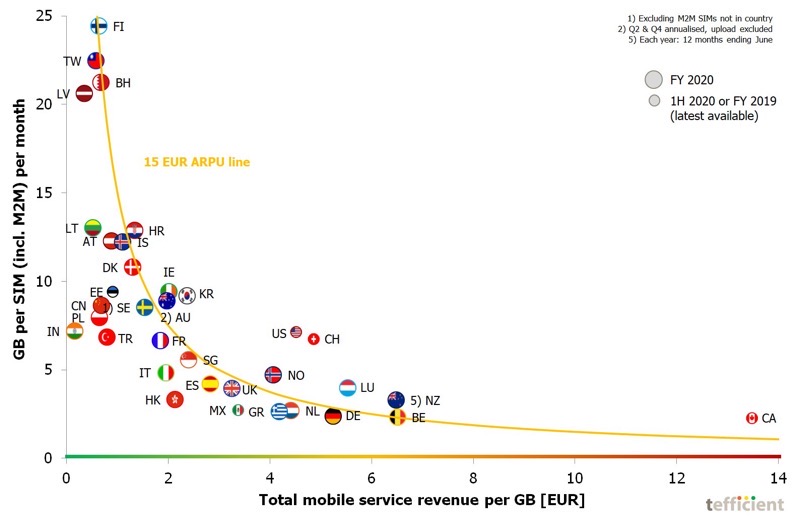 When it comes to mobile data, Tefficient says “using mobile data has never been cheaper but the erosion in the revenue per gigabyte varies a lot between markets.”

One chart shared by Tefficient, showing the total mobile service revenue per gigabyte (Euro) of countries worldwide, shows just how much of an outlier Canada is, when it comes to wireless data pricing.

One gigabyte of mobile data has never been cheaper. And we have never consumed as many GBs as we did in 2020.
Cheap mobile data markets to the left, expensive markets to the right. Small dots: older data (as no new data yet available). https://t.co/CiepPwqCCB pic.twitter.com/0FquztxSMA

“There are a few countries where operators enjoy very high total revenue per consumed gigabyte: Canada foremost, but also the cluster of Belgium, New Zealand, Luxembourg and Germany,” writes Tefficient, which notes the data for Canada is from 2019.

While Canada has the highest total revenue per gigabyte in the world, the lowest is in India.

Another chart shows Canada has the highest average revenue per user (ARPU), yet the lowest usage, says Tefficient. Switzerland and the USA also joins Canada where ARPUs are “much higher than elsewhere”. This data is from 2019, as 2020 data has not been made available yet from regulators, says the firm. 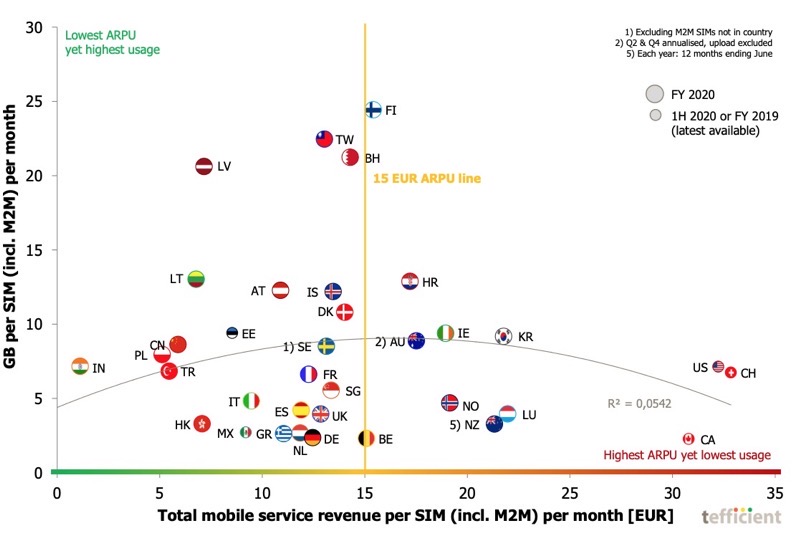 Wow, they extended the x-axis for Canada. It’s wild how much we pay for mobile data (and home internet/tv). Accessing communication in this country is a barrier for many, why is this still an issue?!? https://t.co/NByxVPjcqD

Canada hanging solo in the “most expensive mobile data in world” end is both sad and terrible. #Big3Monopoly #ripoff https://t.co/NhLWHGHYbN

.@JustinTrudeau @BardishKW what are we doing to fix this? Clearly CRTC isn't successful at their job right now https://t.co/JkAiJlGSb8

Seeing Canada all on its own triggered emotions for many Canadians online, with many claiming Canada’s wireless industry is run by an oligopoly and the government not doing enough to control cellphone pricing in the country.

Last month, the CRTC started promoting low-cost plans for Bell, Rogers, Telus and SaskTel, citing how on July 14, 2021, new plans would be coming for those on a “tight budget” and in need of a “low-cost mobile plan.”

Update July 12: A spokesperson for the Canadian Wireless Telecommunications Association emailed iPhone in Canada to push back against the Tefficient study and graphs. The CWTA is the telecom industry’s lobby group.

According to the CWTA spokesperson, Tefficient “outlines that Canada is notable for the “highest ARPU yet lowest usage” but fails to point out that the chart being used shows that the U.S. and Switzerland are higher. So it doesn’t reflect reality nor is it accurate to simply repeat that.”

The CWTA continued to say, “Most importantly, they are comparing 2019 data for Canada vs 2020 for others. We know from ISED and StatCan that recent reports show prices continue to decline in Canada and usage going up. So making those comparisons in those two different time periods is not valid,” added the spokesperson.

“Finally, Tefficient claims that countries like India has the best value yet look at Ookla speed numbers for India vs Canada and calculate how many times Canada is faster,” claims the CWTA spokesperson, concluding with the following claim, “what we know is that vigorous competition among facilities-based operators in Canada is resulting in decline in prices while fueling crucial investment in expansion of networks and in the roll out of 5G.”

The Canadian government on Wednesday announced the results of a residual spectrum auction that concluded on January 17. Residual spectrum auctions are a way for Innovation, Science and Economic Development Canada to sell licences that weren't sold in previous auctions or were returned. Ottawa held an auction for the 3,800 MHz bands in June 2022,...
Nehal Malik
18 hours ago

SaskTel announced on Wednesday it has started rolling out its 5G wireless network to the Battlefords, offering faster download speeds. The Saskatchewan crown corporation says it recently debuted its 5G network in the Town of Battleford, but expects all of Battleford and North Battleford to have full access by the summer of this year. “Our […]
Gary Ng
22 hours ago