More choice, lower prices, and better service are the keywords we’ve heard plenty of times from the Canadian government in relation to the country’s wireless policy. The above keywords are clear enough for us to understand, and it’s easy enough for us to compare the promises to the results of the actions the government has taken over the years.

Industry Canada has proudly highlighted the findings published in Wall Communications’ report on the telecommunications market in Canada: The wireless policy has worked, and Canadians can now enjoy 22% lower wireless prices compared to 2008. Interestingly, though, Canadians still pay the highest wireless bills in the world, and the Bank of America Merrill Lynch Global Wireless Matrix confirms this after analyzing data from Q1 of 2015.

Alphabeatic’s Peter Nowak took out only three tables from the report highlighting the current state of the Canadian wireless market. As you can see from the tables inserted below, Canadian carriers make the most from their customers: an average of $46.58 ARPU (average revenue per user), the highest among all countries compared in the Bank of America study. That’s four times the ARPU carriers in Portugal and Greece make out of their subscribers. 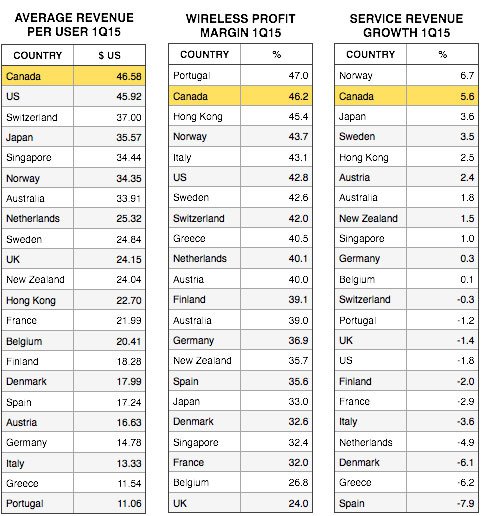 The other two tables look into carrier profitability and service revenue growth. Canada ranks second in both, so carriers have no reason to complain: The typical Canadian wireless bill is up 5.6%. Now compare that to the developed world’s average of 0.5%.

Now, it’s time to look back and compare that to the promises we heard.