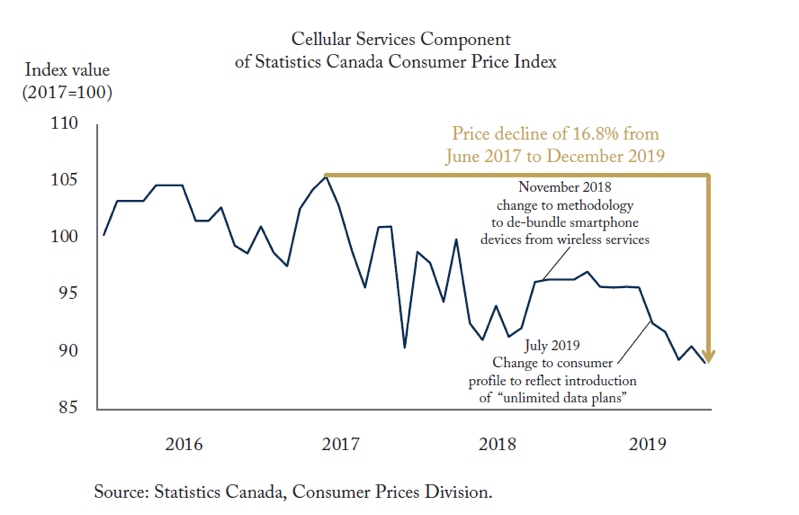 The non-profit think tank, the C.D. Howe Institute, has released a new graphic detailing the Consumer Price Index for cellular services in Canada, noting a “swift decline” has been happening since June 2017.

A Consumer Price Index tracks changes in the prices of weighted average consumer goods and services bought by households.

According to the C.D. Howe Institute’s graphic, it tracks the wireless services component of the Consumer Price Index from Statistics Canada data.

The think tank concludes, “The data indicate that prices for cellular services declined by almost 17 percent as of December 2019 from a high point in June 2017. In contrast, Canada’s all-item Consumer Price index increased by 4.6 percent between June 2017 and December 2019.”

In other words, wireless services declined in price while other consumer goods and services increased during that period.

So from November 2018 to December 2019, the CPI for wireless services dropped about 9 percent, while the decline in July 2019 matches up to recent additions of “unlimited data plans” (throttled once initial buckets are used up), says C.D. Howe.

Rogers reacted to the C.D. Howe Institute’s conclusion by saying, “We were the first national carrier to introduce unlimited data plans with no overage fees, helping our customers get the most out of their wireless services and further strengthening the choice & value we offer our customers.”

We’ve seen more data being added to wireless plans over the past few years, but data overages are still expensive for those not subscribed to ‘no overage plans’.

Prime Minister Justin Trudeau’s government says it plans to reduce wireless prices by 25% in two years, either through the introduction of MNVOs or regulation. No details of the plan and how it will be achieved have been released, yet.

The Canadian government on Wednesday announced the results of a residual spectrum auction that concluded on January 17. Residual spectrum auctions are a way for Innovation, Science and Economic Development Canada to sell licences that weren't sold in previous auctions or were returned. Ottawa held an auction for the 3,800 MHz bands in June 2022,...
Nehal Malik
5 hours ago

MPs on the House of Commons' industry and technology committee on Wednesday expressed concerns about the impact of Rogers’ proposed $26 billion takeover of Shaw Communications on jobs, competition, and affordability in Canada's telecommunications sector (via The Globe and Mail). During another hearing on the long-embattled merger just a week before its January 31 deadline,...
Nehal Malik
8 hours ago

SaskTel announced on Wednesday it has started rolling out its 5G wireless network to the Battlefords, offering faster download speeds. The Saskatchewan crown corporation says it recently debuted its 5G network in the Town of Battleford, but expects all of Battleford and North Battleford to have full access by the summer of this year. “Our […]
Gary Ng
9 hours ago