Below is an updated chart (via CWTA) of text messages—note the decline in the first three quarters of this year—it’ll be interesting to see how this chart evolves: 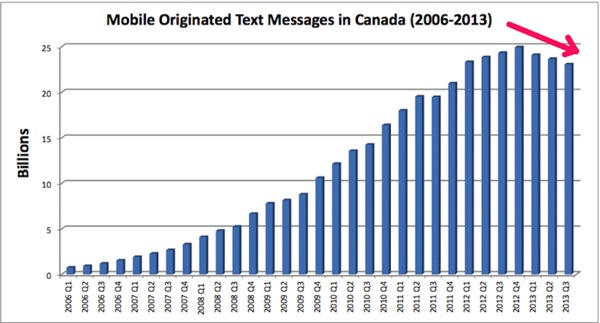 Most likely this is a result of people adopting more smartphones and relying on data-based messaging services such as iMessage, WhatsApp, BBM (!), etc.

What do you use more? Regular text messages or another messaging system such as iMessage or WhatsApp? Remember, don’t call me unless it’s an absolute emergency (like you’re on fire); just text me instead!

Here are the latest Canadian cellphone plan and device deals, plus other promos from wireless carriers such as Rogers, Telus and Bell, from our partner PlanHub. As always, the promos may change at the last minute, but here they are as of Wednesday, October 5, 2022. Check them out below… Bell Noticeable price changes: Get a […]
IIC Deals
16 hours ago