Canadian Carriers Will Have “Minimal” iPhone 7 Stock at Launch: Report

According to Daniel Bader from iMore, carrier documents obtained note iPhone 7 stock will be limited at launch from Canadian carriers:

According to carrier documents obtained by iMore, stock of all iPhone 7 devices will be minimal at launch, with a three- to four-week waiting period for the first “regular” colors — black, gold, silver, and rose gold — and with an additional wait of up to three weeks for the Jet Black model.

Apple earlier this morning announced all Jet Black iPhone 7 models had sold out, while Apple Stores won’t be getting iPhone 7 Plus at launch, due to lack of supply. Also, Rogers has been cancelling some iPhone 7 pre-orders, after some business customers reserved through the consumer portal.

The details of lack of iPhone 7 stock for carriers may also corroborate what TELUS told one iPhone in Canada reader on Twitter DM—that “no carrier in North America has 7 plus for launch day unfortunately.” 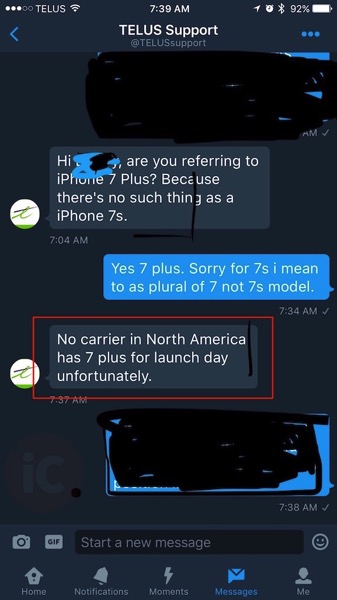 We tried to corroborate that TELUS statement, but the company said iPhone 7 Plus would be in stock tomorrow, however we were told to contact our local store to “verify” what’s available (not very promising).

TELUS also has been contacting customers about their pre-orders. Some devices reserved won’t be available tomorrow, so customers are being offered alternatives in other colours.

iPhone in Canada reader Scott was offered to receive an alternate iPhone 7 colour tomorrow or a Bluetooth speaker valued at $130. He asked for a bill credit instead and was given $100. So your mileage may vary, folks.

The bottom line is with every new iPhone launch, initial supplies are constrained. This year, despite not having a major redesign externally, the iPhone 7 and iPhone 7 Plus continues to draw high demand, as the phone’s hardware upgrades are well worth it to many. Jet Black and (matte) Black look to be the new black–wait, what?

Share your iPhone 7 and iPhone 7 Plus carrier war stories below.