Rogers has started to send notifications to some customers to let them know their reserved iPhone 7 and iPhone 7 Plus units have shipped to stores, such as the following email received by iPhone in Canada reader @MatBeausoleil: 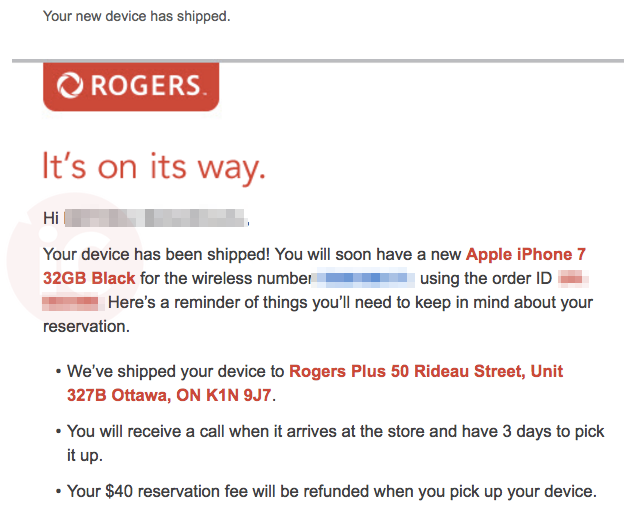 While there’s good news, there’s also some bad news for some Rogers customers. Another iPhone in Canada reader emailed to say Rogers cancelled his reservation, noting the latter was made through the “incorrect Reservation System.” 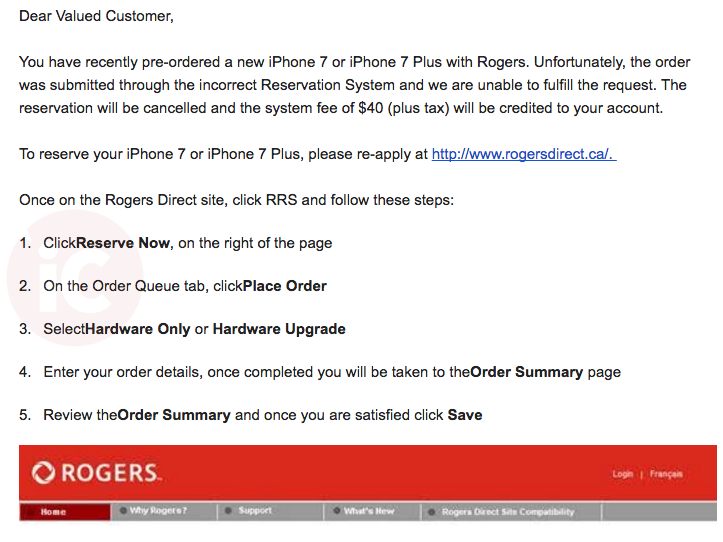 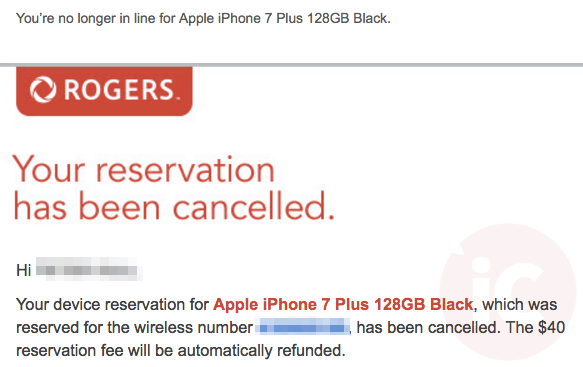 What’s interesting though, is our reader said he made his reservation through the upgrade method under MyRogers. He received an iPhone 7 confirmation email, which noted the store address for pick up, plus noted he was at about #400 on the waiting list. That really sucks—I’d be livid.

On a side note, iPhone 7 and iPhone 7 Plus units have already reached some wireless carrier stores. The following image was sent in from an anonymous reader: 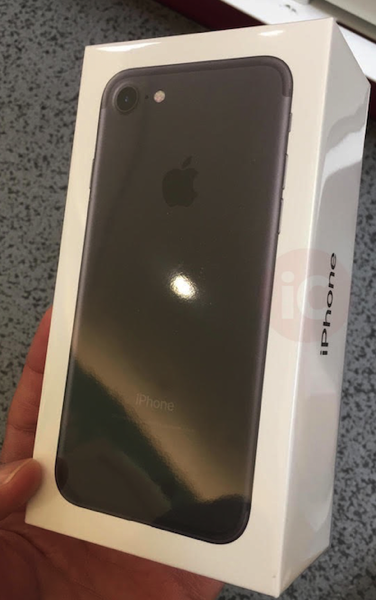 Have you received notification your Rogers or Fido iPhone 7/7 Plus pre-order has shipped?

The iPhone 7 and iPhone 7 Plus are set to launch on Friday, September 16 in Canada.

Update Sept. 15/16: We reached out to Rogers and a spokesperson responded with the following statement:

We’re making sure that all of our customers get their iPhone 7’s as quickly as possible. Any business customers who re-place their order here: http://www.rogersdirect.ca will be placed back in the pre-order line in a similar spot.

Rogers also commented on the high demand of iPhone 7 pre-orders, to say the following:

There’s no question, our customers are iPhone fans and that’s reflected in our pre-orders for both Rogers & Fido.

Click here to learn how to find your UPS tracking number for iPhone 7 and iPhone 7 Plus pre-orders from Apple. Update: if you enter in your phone number under Reference on UPS.com, you can track your Rogers reservation.

After Koodo launched a $45/50GB promo plan for Black Friday today, Rogers-owned Fido has now matched this offer. That’s according to reliable mobile insider ‘Thatdealguy’ on RFD, who noted the matching offer from Fido also is eligible for additional gift cards and rewards points bonuses at retailers such as Walmart, Best Buy, The Mobile Shop […]
IIC Deals
3 hours ago

Rogers's President of Integration, Dean Prevost, accidentally revealed during a Competition Tribunal hearing against Canada's Competition Bureau on Thursday that he is set to receive a $2 million bonus if the company's proposed $26 billion acquisition of Shaw Communications goes through — reports the Hanna Herald. This figure had previously been confidential but slipped out...
Nehal Malik
21 hours ago

Image via RFD user ‘h2o-‘ Rogers-owned Fido is offering up an in-store Black Friday and Cyber Monday deal for 2022, in the form of a $30GB plan with 20GB of data for new customers. This plan is supposed to debut on Friday, November 25, but some stores have started to offer it early. This plan […]
Gary Ng
22 hours ago