Did you know that the Big Three wireless companies made $18.7 billion in profits last year?

We know that Canadians continue to pay some of the highest wireless rates in the developed world, and that consumers want to have more wireless choices at low prices.

While Canada’s largest wireless companies protect their bottom lines, your Conservative Government is standing up for Canadian consumers.

Since 2008, our pro-competition, pro-consumer polices have driven down the average cost of wireless services for Canadians by nearly 20% – and we are just getting started.

We’re putting consumers first and standing up for more competition in Canada’s wireless industry but we need your help to make sure our voice is being heard.

That is why I am asking you to make a special one-time donation of $25 or $50 today.

Will you stand up with us? 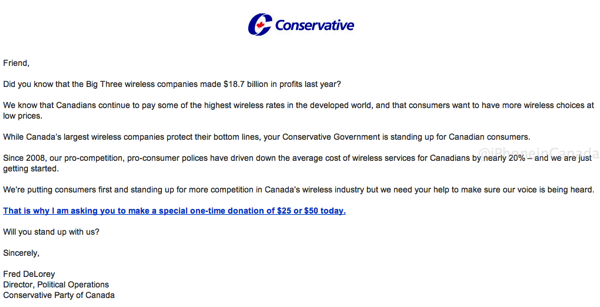 Ottawa recently launched its own PR campaign against the Big 3 to emphasize the government is “here to represent the interests of all Canadians” when it comes to increasing wireless competition and lowering prices. The campaign is seen as a response to the ‘Fair for Canada’ PR blitz launched by incumbents which targeted Ottawa and foreign competition. CRTC letters revealed public disapproval over the campaign.

Has the fight for wireless competition become a political tool? What do you think about this campaign by the Conservatives?