The Canadian Radio-television and Telecommunications Commission (CRTC) has just announced it has denied FairPlay Canada’s application to propose a website blocking plan, in order to combat piracy websites.

According to the CRTC, the denied application is because FairPlay Canada “does not have the jurisdiction under the Telecommunications Act. As such, the CRTC did not consider the merits of the proposal.” 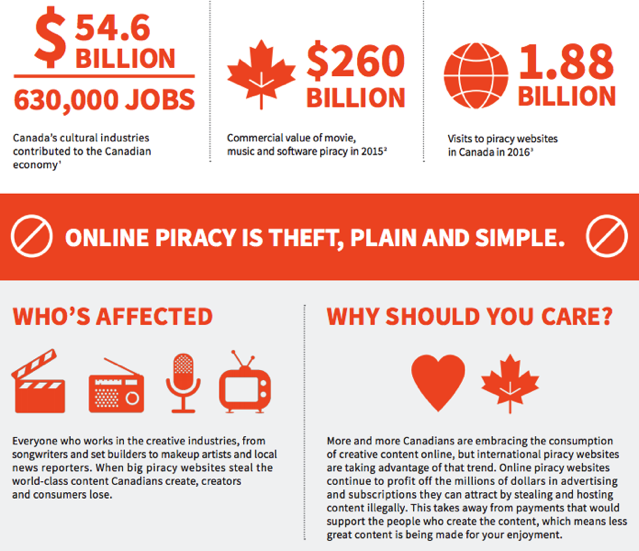 The FairPlay Canada proposal wanted the CRTC to create a non-profit called the Internet Piracy Review Agency (IPRA), to identify websites dealing with copyright piracy. These websites would then be blocked by Internet service providers.

The CRTC concludes “other avenues are more suitable to address this issue, which include the ongoing parliamentary review of the Copyright Act, as well as the expert panel review of the Telecommunications Act and the Broadcasting Act,” to deal with piracy.

According to the CRTC decision, here are the numbers from Canadians who filed interventions, led by opposition groups:

FairPlay Canada was a coalition led by Bell Canada, and included other companies such as Rogers Media, Telus, CBC, Corus and more.

University of Ottawa Law Professor, Dr. Michael Geist–who helped play an important part in voicing concerns against the proposal–reacted to today’s decision with the following:

The CRTC’s denial of the site blocking application is an important step toward stopping a dangerous proposal, but Bell will surely continue to pursue its proposal in alternate venues. Interestingly, the USMCA does not include any reference to site blocking or seek to establish such a system. Thousands of Canadians stepped up in the spring to ensure that the Commission was aware of the legal, technical, and policy concerns with site blocking without a court order. In the months ahead, they may need to speak out yet again.

Update Oct. 2/18: Here’s a statement on the decision by Byron Holland, president and CEO, the Canadian Internet Registration Authority, in an email to iPhone in Canada:

“CIRA is pleased with the CRTC’s decision to deny the application from FairPlay Canada. The FairPlay submission was a sledgehammer in search of a fly to squash. CIRA has long believed that the harms of blocking content far outweigh any issues it attempts to resolve, and the FairPlay proposal’s approach to content blocking did not meet spirit of Canada’s open internet approach.

While the application was denied on jurisdictional grounds, CIRA believes that the existing legal and regulatory environment is sufficient to protect content holders’ rights.”