Freedom Mobile, formerly known as WIND Mobile, has launched promotion on its $45 Canada/USA plan. The ‘Big Gig Event’ sees the plan drop by $10 to $35 (for 10 months), plus throws in 3GB bonus data for 12 months, taking it to 6GB full LTE data (for at least a year). 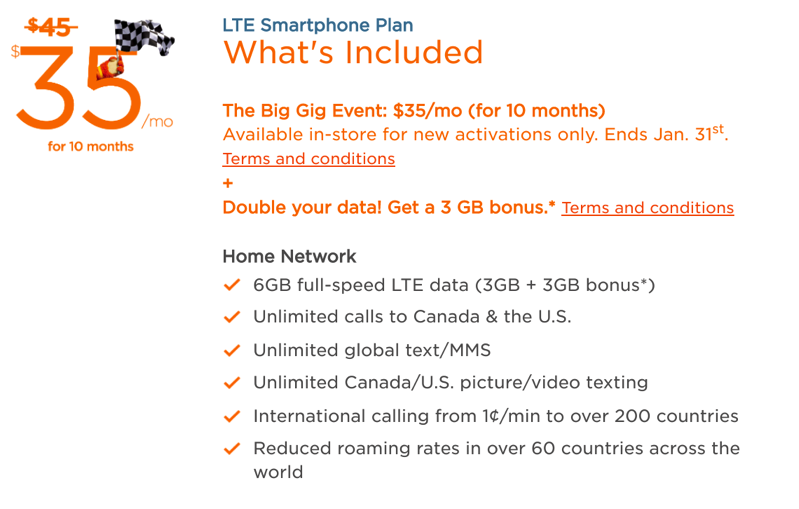 The plan offers unlimited calling to Canada and the USA, along with unlimited global SMS/MMS and the usual extras like Caller ID, Voicemail+ and more.

The fine print reads the following:

Shaw announced Freedom Mobile’s faster network last November, but the caveat is the AWS Band 3 LTE, which currently is not supported by the iPhone; only a couple smartphones nobody wants support AWS Band 3 (LG V20; ZTE Grand X 4), are available from the company.

We’ve seen Freedom Mobile try to retain its current customers with similar promos for bonus data, but right now its AWS Band 3 LTE network is only available in Vancouver and Toronto. Everyone else is still plagued by its spotty HSPA network.

Looks like Shaw is bringing over their home Internet-style discounts to mobile plans, offering discounts for a limited period to entice customers to sign on. Until the company expands its LTE footprint and more phones can support AWS Band 3 (especially the iPhone), it’ll be a hard sell.

TekSavvy announced on Monday it has launched a new referral program in time for the holiday season, offering both parties $120 in bill credits each. The new “Give $120 and Get $120” program is “about pivoting from spending on unnecessary items to sharing savings between customers and their friends or family,” said a spokesperson in […]
Gary Ng
9 hours ago