How to Watch U.S. Super Bowl Ads on TV in Canada: Tune Into CBS Says CRTC

For the 2019 Super Bowl, Canadians will again be able to tune into American ads on TV, which are seen as an essential part of the viewing experience. But don’t get used to it, because this could the final time you’ll see American ads in Canada during the Super Bowl. 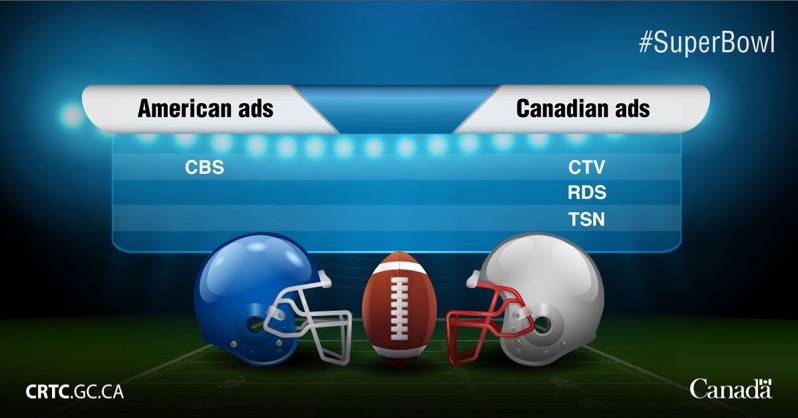 Within the United States-Mexico-Canada Agreement—known as USMCA—the Canadian government agreed to overturn a ruling on simultaneous substitution during the Super Bowl. This means American ads won’t be able to play on Canadian networks during the big game anymore.

But the USMCA hasn’t been ratified yet, so the ongoing battle between the CRTC and Bell Media continues. Bell Media owns the distribution rights to the Super Bowl in Canada.

Prior to 2016, during the Super Bowl, instead of seeing blockbuster American ads in Canada, Bell Media was able to “sim-sub” Canadian ads instead, benefitting the latter’s advertising network.


Watching #SBLIII this Sunday? @CTV, @TSN_Sports and @RDSca will be airing Canadian ads. @CBS will be running the American ads. https://t.co/OUV1jagL4V pic.twitter.com/0SKAivBmZr

According to the CRTC, to watch American ads during the 2019 Super Bowl, all you need to do is tune into CBS to see the big-budget ads during the game.

The average cost of a 30-second American TV ad during the 2019 Super Bowl is pegged at 5.25 million USD, or $6.8 million Canadian dollars.

Rogers’ proposed $26 billion takeover of Shaw Communications, if successful, could deliver a $216 million payday to 12 hedge funds that bet on it — reports Reuters. The controversial and heavily contested merger has a January 31 deadline. With the Federal Court of Appeal rejecting the Competition Bureau’s appeal of the merger on Tuesday, Rogers and...
Nehal Malik
6 hours ago