MTS has announced customers can pre-order iPhone 6 and iPhone 6 Plus today, with the launch slated for this Friday, September 19, like the rest of Canada. Pre-orders can be made at any MTS Connect Store. 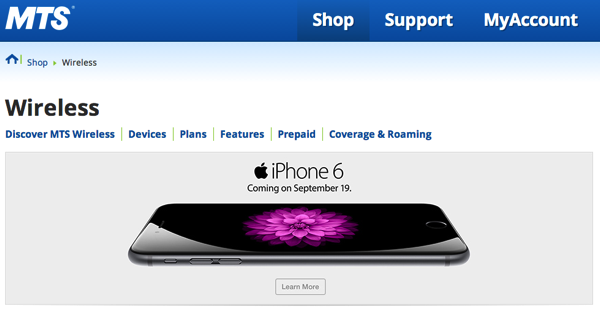 “MTS is delighted to add the amazing iPhone 6 and iPhone 6 Plus to our extensive wireless line-up,” said MTS President Kelvin Shepherd. “We are very pleased to offer the new iPhones with a range of attractive data plans that allow our customers to connect to our 4G LTE network with speeds of up to 150 Mbps. iPhone 6 and iPhone 6 Plus customers will also be able to take advantage of free access to all MTS Wi-Fi Hotspots so they can enjoy the incredible features to the fullest.”

The prices are similar to other carriers for two-year term contracts, as follows:

Let us know if you’re going to make your iPhone 6 pre-order today with MTS!

Update: It appears there was a mix up in communications between MTS stores and headquarters. Numerous MTS customers found out quickly stores had no idea what they were talking about regarding iPhone 6 pre-orders…(thanks Gerrit):

@talktoMTS store on Henderson has no idea what you're talking about, just left there.

@talktoMTS yep just stopped into Henderson they say NO pre orders at any stores. Please reply

@talktoMTS No, you're not. Not super thrilled at the time I wasted going to a store to preorder. No preorders happening.

@talktoMTS Kildonan Place has no idea either.

@talktoMTS The incorrect tweet word here "preorders". The connect stores did have their information correct in this situation.