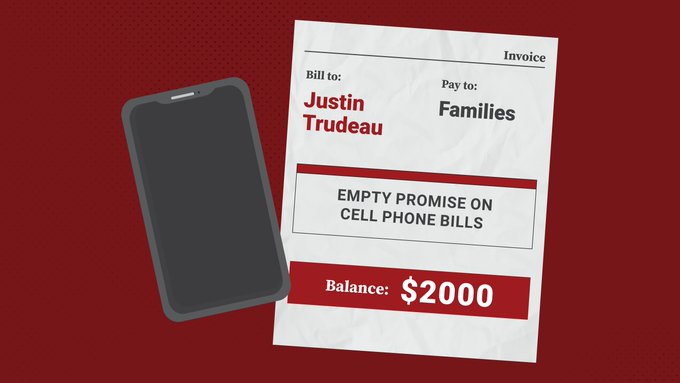 The next federal election will take place in September and the federal NDP says they will tackle big telecoms in Canada to lower cellphone and internet bills.

On Wednesday, the NDP said, “Canadians pay some of the highest prices in the world for cell and internet access while rich telecom companies make billions in profits every year.”

“These are essential utilities. But Trudeau’s government has given big telecom corporations hundreds of millions of dollars in subsidies and government contracts, while doing nothing to lower Canadians’ cell and internet bills,” explained the party’s election page.

Canadians pay some of the highest cell & internet bills in the world.

This election you have a choice – Justin Trudeau, who broke his promise to lower our bills to protect telecom companies.

Or Jagmeet, who will cap rates and take on big companies.https://t.co/b5qi1pGzxm pic.twitter.com/fsZjOXonK8

According to the NDP, leader Jagmeet Singh and fellow MPs debut what they call a ‘Telecom Consumers’ Bill of Rights’, while also expand cell coverage and affordable broadband internet. The NDP also says it will put a price cap on cellphone and internet bills, to ensure “Canadians aren’t paying more than the global average”.

“This election you have a choice – Justin Trudeau, who broke his promise to lower our bills to protect telecom companies. Or Jagmeet, who will cap rates and take on big companies,” concludes the NDP.

Prime Minister Trudeau has promised to lower cellphone prices for data plans in the 2GB to 6GB range by 25%, and currently is tracking prices to show how much progress they’ve made.

It’s unclear how the NDP will impose price caps on Big Telecom, aside from forced government regulation. We know when the threat of regulation is voiced, incumbents tend to push back by saying they will slow down or stop wireless and internet investments, which will result in job losses and massive damage to the Canadian economy.

TekSavvy announced on Monday it has launched a new referral program in time for the holiday season, offering both parties $120 in bill credits each. The new “Give $120 and Get $120” program is “about pivoting from spending on unnecessary items to sharing savings between customers and their friends or family,” said a spokesperson in […]
Gary Ng
14 hours ago