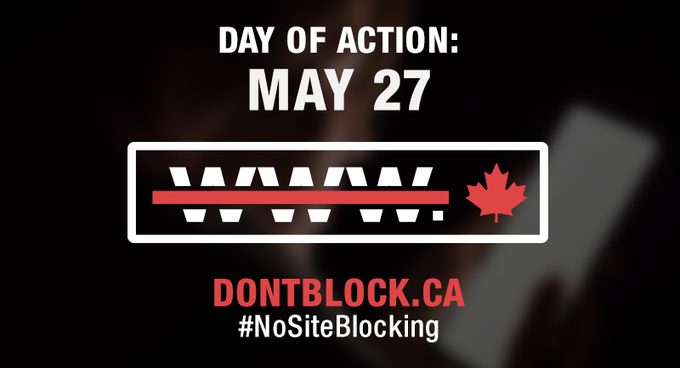 Vancouver-based non-profit and internet advocate, OpenMedia, along with other civil groups, has launched a national ‘Day of Action’ on May 27, which it says is aimed at raising awareness for a federal government proposal, that would allow internet service providers (ISPs) to block websites.

“Canada’s federal government is considering forcing ISPs and other online intermediaries to block access to many websites and services, and even permanently disconnect users — all at the request of copyright holders like Bell and Shaw,” says OpenMedia, which urges users to submit feedback on the consultation of the proposal.

“We call on our government to explicitly reject requiring or encouraging the blocking of websites and disconnection of Internet users in response to alleged copyright infringement. Existing safe harbour protections that uphold net neutrality and common carriage must be upheld. Unrestricted access to the Internet is an essential service, critical to our freedom of expression and access to information, and must remain protected in Canada,” said OpenMedia and other organizations across the country in a joint statement.

“This is a wildly overreaching proposal straight from Bell’s wishlist,” said OpenMedia Campaigns Director Matthew Hatfield in a statement. “It’s incredibly concerning to see the government now actively proposing a plan that has already been rejected multiple times, including by the CRTC. There’s nothing fair or proportionate about what’s being proposed through this copyright consultation, and today folks are asking our government to reject these ideas for good.”

Yesterday, Canada’s Federal Court of Appeal upheld what appears to be the country’s first-ever website blocking framework, in what critics say sets a dangerous precedent for free and open internet.

You can click here to read more about what you can do to participate and make your voice heard.