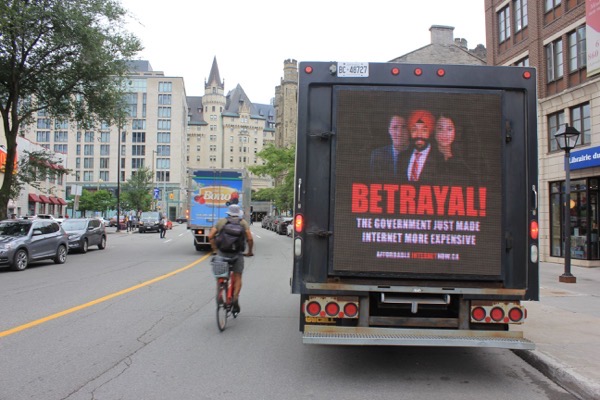 Last week, Vancouver-based non-profit and consumer advocate, OpenMedia, launched new mobile billboards to drive around Ottawa and Toronto, to share what it calls is ‘betrayal’ by the federal government when it comes to affordable internet.

Betrayed! Last month, Minister Bains chose to side with Big Telecom and undermine affordable Internet – at a time when we need it more than ever. Our mobile billboards are out on the streets – join here https://t.co/u0DK6gILPl pic.twitter.com/RTAM06BCkr

Done waiting for affordable Internet? So are we. So we sent our mobile billboards all over #TIFF and Parliament. Join here here https://t.co/Mwo2lDQnzO pic.twitter.com/D0TbLxZef5

“This government has been promising us more affordable Internet for years. But when he finally gets a chance to make that happen, Minister Bains has caved to the temper tantrums and high priced lobbyists of Big Telecom, and their threats to withhold rural Internet if he doesn’t raise Internet prices,” continued OpenMedia.

“We need action. You say you care about investment. But if investment is actually what matters to you, then why won’t you do something about it? Open and expand the Universal Broadband Fund we’ve been waiting over 16 months for, that Minister Maryam Monsef claimed was coming over 70 days ago,” details the pre-filled form.