PCMag has completed tests for their Fastest Mobile Networks Canada 2014 report (which started back in late July), declaring Rogers and Bell the national and regional winners in a tie. For scores with a difference of less than one point, the publication said it’s considered a tie—Rogers and Bell saw final scores with less than seven-tenths of a point.

Both carriers had wins in city by city and feature by feature comparisons across Canada, but the difference maker for each network?

Rogers’ download speeds are unmatched across much of Canada, but Bell’s lead on the other factors helped it pull ahead in a slight majority of our cities. We’d say that Rogers has Canada’s fastest downloads by a long shot, but Bell has a better-balanced network.

As for Telus? PCMag says the network lacks the 2600MHz spectrum that boosted Rogers and Bell network speeds, while they also ran into ‘network configuration issues’ which caused some of their tests to time out.

Below are the national results for fastest LTE and 3G networks: 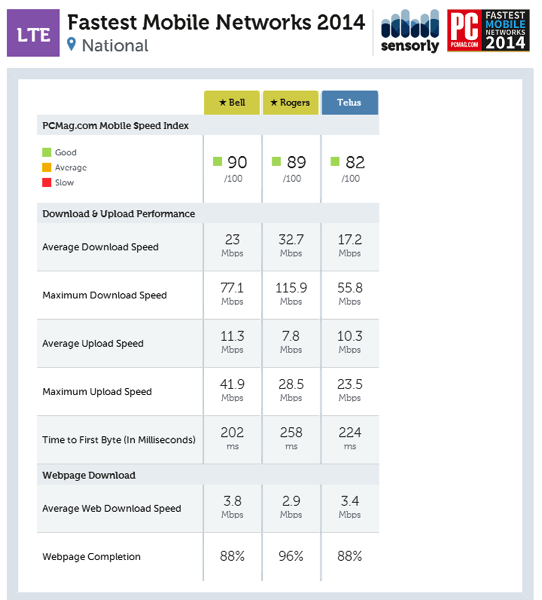 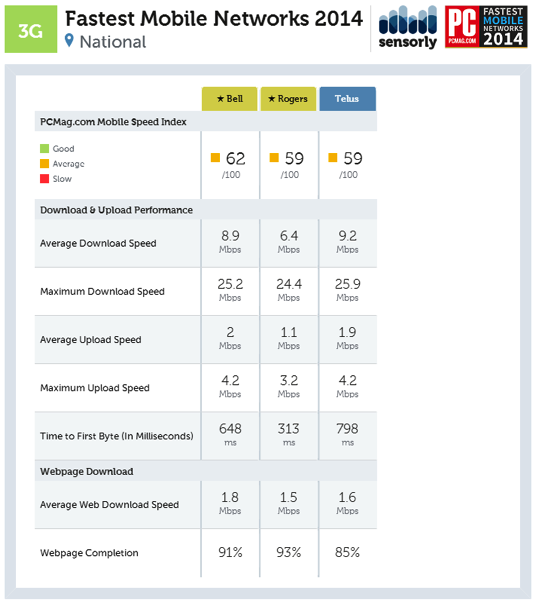 We asked Sascha Segan, the mobile lead analyst at PCMag, what was the major surprise from this year’s test compared to last year. Here’s what he had to say:

The growth of the regionals as possible nationwide competitors is what really caught my attention this year. Eastlink has a better LTE network in its home province than anyone else does. Videotron’s recent LTE launch piggybacks on a really broad, solid 3G network. If these guys can get the domestic roaming rates they want from the CRTC, they could be nationwide players.

As for highlights and favourite visits from his nationwide trek across Canada, Segan said he was “pleasantly surprised” with New Brunswick and Nova Scotia, as these provinces aren’t discussed much in the U.S. He said “that trip turned out to be our most scenic drive, peppered with really charming small cities.”

Segan explained the new iPhone 6 will take advantage of LTE networks thanks to the inclusion of Band 7, which allowed him to get “crazy-fast” download speeds on Rogers in Richmond, B.C., such as 115Mbps (Bell also has Band 7 in some areas as well). For users on Rogers and Bell, the switch from an iPhone 5s to iPhone 6 “will make a real difference in speed.”

It’ll be interesting to see how long sustained speeds on Band 7 will remain once more iPhone 6 users jump online. Here’s a ridiculous test of 117Mbps over the weekend by iPhoneinCanada.ca reader @starturtle, tested last night in Port Coquitlam on the Delta server:

Last year’s nationwide wireless network test by PCMag resulted in Rogers taking the crown as the fastest network in Canada.

This year added Victoria, Halifax and Eastlink to the mix, with tests conducted with an HTC One M8 using field test software from Sensorly. The goal of these tests is to determine “whether Canadians are getting the service they’re paying for.”

These are some pretty extensive and detailed results by PCMag—you can check out their final reporting by province by reading their full report here.