PCMag has completed their first ever nationwide speed test of Canada’s mobile data networks in 13 metro areas and has concluded the Rogers data network is the fastest in town, beating out Telus and Bell with speeds up to 92Mbps download on the 2600MHz LTE network in Vancouver:

Rogers’ national reach along with its growing high-speed 2600MHz LTE network make it Canada’s fastest carrier, nationwide. But Bell, Rogers, and Telus all performed well in our 13 cities, and regional carriers Videotron and MTS did well in their limited coverage areas.

Rogers delivered download speeds higher than 8Mbps at least 90 percent of the time in every city except Toronto (where it was 86 percent), making it the most consistent high-speed download experience. Bell broke that 90-percent barrier in 10 cities; Telus, in five. Higher upload speeds, especially during our Toronto tests, helped Bell keep pace. But in the many cities where Rogers offers 2600MHz service, its speeds tended to dominate, and we think it will extend its lead with the new Category 4 LTE phones coming out over the next several months.

As for regional winners, in southern Ontario, it was a tie between Rogers and Bell. Below is the data for the national tests: 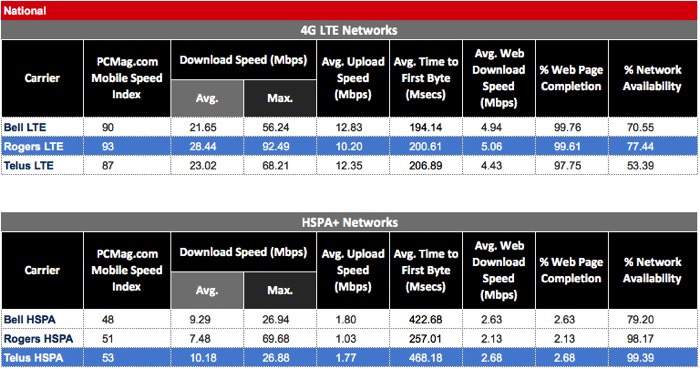 The publication covered 13 of 14 top metro areas by population (but left out Victoria; what, no time for BC Ferries?!), which equates to half of our population, or 17 million people according to 2011 census data.

Tests were completed in August and September, before smartphones with Category 4 LTE modems were released on Bell and Rogers. Two days were spent in each of the five biggest cities and one day in smaller cities, with testing done in both the suburbs and core metro areas. Here’s how they tested data speeds:

We used separate phones for the Rogers, Telus, and Bell HSPA+ and LTE networks, with one device locked to each network. Because Telus and Bell share towers in many areas, if the phones detected that they were using the same tower, we toggled the Bell and Telus phones so they weren’t running at the same time. 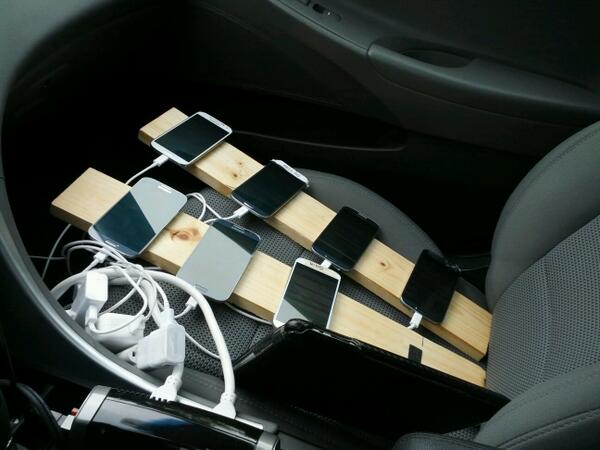 PCMag says every city had LTE and HSPA coverage from the Big 3. They also tested Videotron in Montreal and Quebec, MTS in Winnipeg and WIND where available. SaskTel and Eastlink cities were not tested and Mobilicity opted out of the tests. In 2014, there are plans to hit up Saskatchewan and the Maritimes if possible.

The report is extensive, but here are the regional winners:

PCMag concluded data prices were the same amongst Rogers, TELUS and Bell and said “it could stand to be a little more affordable.” The bottom line: despite the high prices we pay for data, it is worth it based on the impressive LTE networks built by the Big 3, as speeds would make “south-of-the-border Americans green with envy.”

You can check out the extensive report here, it’s a doozy. The Rogers Redboard also has an interview with PCMag.com Lead Mobile Analyst Sascha Segan who ran the mobile network tests.

What do you think about the network coverage in your area by the Big 3?