If you’re a prepaid wireless customer with either Telus’ Public Mobile, Bell’s Lucky Mobile, or Rogers’ Chatr, all three brands have launched a $50 plan with 8.5GB of 3G data.

The plans offer unlimited Canada-wide and US calling, plus unlimited international texts. In order to get the 500MB bonus, you need to setup autopay, which is linking your credit card for pre-authorized payments. 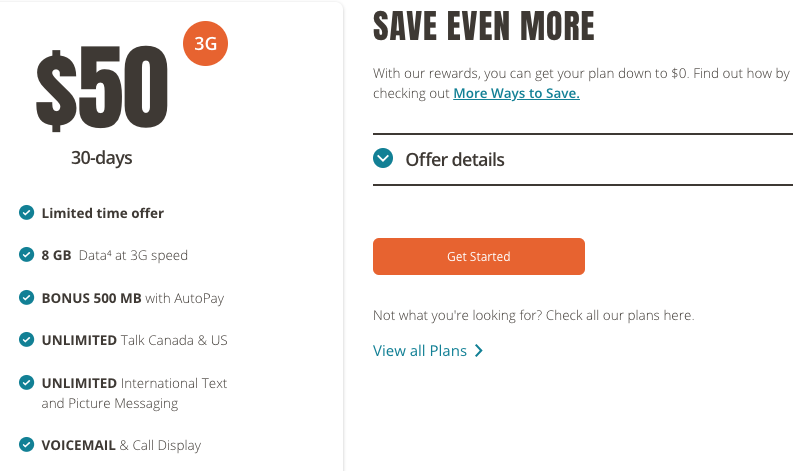 For those on Public Mobile, the company throttles their LTE network down to 3G speeds, which some customers say still offer decent speeds and coverage, as opposed to legacy 3G networks on Rogers and Bell.

Some RFD users are saying they get download speeds of 25 Mbps, while others have said Public Mobile 3G speeds were faster than LTE coverage from Fido. Overall, Public Mobile’s 3G speeds are better than expected:

Me and my wife have been using it for past couple of months and there has been hardly anytime we missed LTE speed. Streaming (Video & Audio) works flawlessly and so does navigation which is what most people use when they are away from home. And unlimited US calling is a plus.

Public Mobile also offers $2 off with Autopay, so this plan lowers to $48 per month. If you were on this $50/8GB plan before, log in and change your plan to get your bonus 500MB with Public Mobile.

Chatr’s offer does not include unlimited US calling yet, but most likely it will be updated to match its rivals.