At the Canadian Radio-television and Telecommunications Commission’s public hearing today regarding misleading and aggressive retail sales practices of Canada’s large telecommunications carriers, officials from Rogers and Bell addressed a panel in their first chance to participate in the five-day public investigation by the regulator, CBC News is reporting.

Shaw began the day’s proceedings by arguing that even though door-to-door sales are done by third-party resellers sometimes attributes to overly aggressive selling, it does not believe it is a widespread problem in the industry. \

The Calgary-based company was followed by Rogers, whose officials disputed the notion that misleading tactics are widespread.

“There’s not a lot of motivation to sell somebody something they don’t want or need,” vice-president of channel marketing Melissa Marsh said. “Selling our customers products or services that they do not want or cannot afford is just bad business,” said David Watt, the company’s senior vice-president of regulatory affairs added.

Officials from Bell ultimately took the spotlight and presented the following proposals for new rules that it believes should apply to all telecom companies (via Twitter), which includes a 30-day buyer’s remorse option and a “Do-Not-Knock” list, to go with a whistleblower policy for employees: 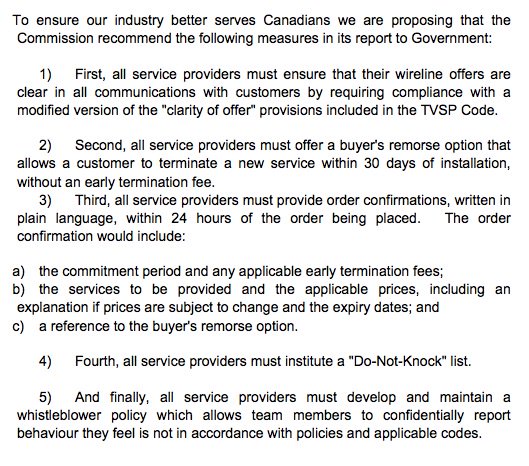 Bell responded to CRTC chairman Ian Scott to say, “we take complaints very, very seriously,” while adding sometimes there’s a “mismatch of customer expectations of what they are signing up for,” which leads to confusion.

You can follow the CRTC’s hearing live at the following player below (it’s a bit of a snoozefest FYI):

If you want to read the full transcripts from telecoms, check them out below:

Presentation by Bell Canada at the #CRTC hearing https://t.co/tmRf6OTD6p

Good Morning and welcome to day 5 of the #CRTC hearing – Presentation by Shaw Communications Inc https://t.co/Qa7HqnXRS8

Presentation by TELUS at the #CRTC hearing – https://t.co/v5APkbsg9z

Even after all these hearings at the CRTC–will Canadians see any real change from incumbents when it comes to their sales practices? If you don’t go with one company, you’re forced to go with another. No foreign telecom competition is available in Canada.

Rogers and Shaw today announced an extension of their proposed $26 billion merger, along with the sale of Shaw-owned Freedom Mobile to Quebecor’s Vidéotron in a side deal that's part of the broader transaction, to February 17, 2023. "All parties remain committed to the pro-competitive transactions, which will deliver significant benefits to Canada and Canadian...
Nehal Malik
14 hours ago