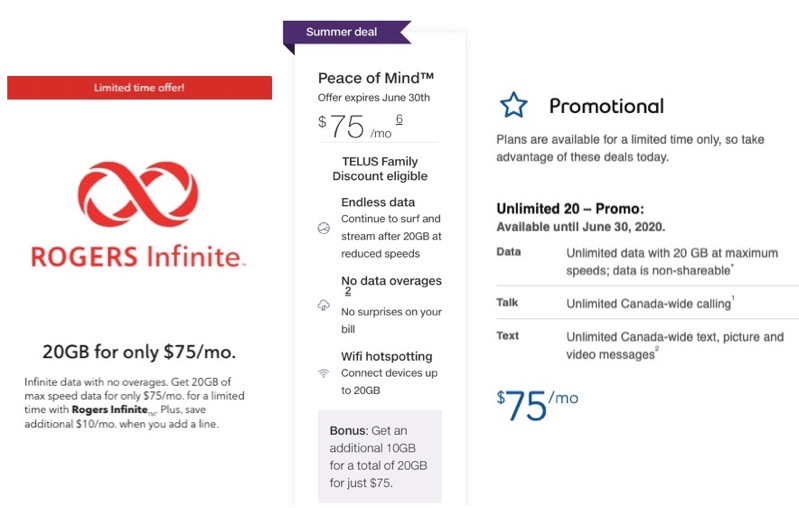 Is this yet another case of déjà vu? Rogers, Telus and Bell are again offering promotional $75/20GB ‘unlimited’ data plans, expiring on June 30, 2020.

Canada’s Big 3 wireless carriers had this same promo plan a couple of weeks ago and the $75/20GB plan has been ongoing as a special plan for the past few months. The regular price of the plan is $75 with 10GB of data, but with 20GB of data, it’s essentially $20/month in savings when compared to the 20GB plan which costs $95 per month.

These ‘unlimited’ plans include full-speed LTE data up to 20GB, and then speeds are throttled to 512 Kbps. Plans include unlimited nationwide calling and the usual extras like unlimited texting, voicemail and more. No data overages occur with these plans.

The Rogers plan includes shareable data, while Telus and Bell’s $75/20GB plan does not. The promo is advertised as expiring on June 30 from Telus and Bell and look to push for some higher-priced activations to end out the month. The last time this promo was on, it was expiring on June 15. This special plan is like the Energizer Bunny–it just keeps going and going and going…