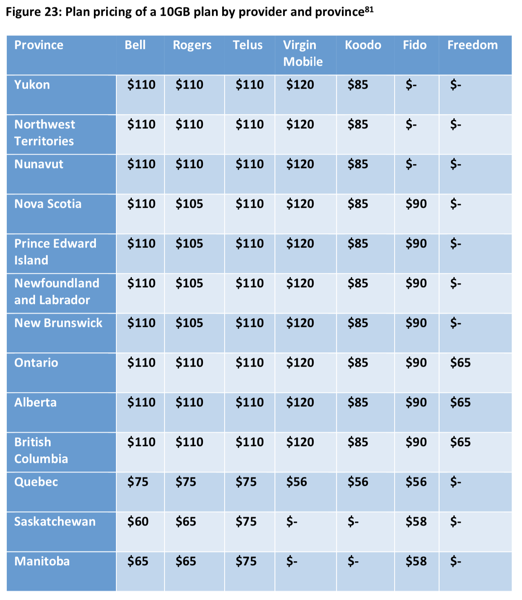 Canada’s Competition Bureau has submitted their detailed comments in regards to the CRTC’s review of mobile wireless services, concluding more competition for Rogers, Telus and Bell is needed to lower cellphone pricing.

The Bureau says “wireless plans are consistently more expensive in parts of Canada where Telus, Rogers and Bell do not compete with a strong regional competitor,” according to a press release.

Using a 10GB plan as an example, it can cost $60-$75 per month in provinces where regional competitors exist (SaskTel in SK and Videotron in QC, for example), in provinces such as Saskatchewan, Manitoba and Quebec.

But in areas outside these provinces for the same 10GB plan, Rogers, Telus and Bell charge anywhere from $105-110 per month, according to the Bureau, which it says is an “increase of up to 80% when compared to provinces with a strong regional competitor.”

“Factors such as network quality, coverage, demographics or geographic characteristics do not explain the differences in price across the provinces. The only factor that explained price differences was a strong regional competitor,” says the Bureau.

According to Matthew Boswell, Commissioner of Competition, he said in a statement, “We are making the case for increased competition in the wireless sector to lower prices and increase choice on services that Canadians depend on.”

“It is clear that Canadians could benefit from more competition in the wireless marketplace,” explains the Bureau’s press release.

Within the Bureau’s detailed report, they conclude, “It seems clear that competitive pressures are currently insufficient to restrain the exercise of market power in Canada. However, it is possible that facilities-based
competitors will, in the future, change the status quo so that Canadians enjoy the benefits of greater competition in wireless markets, including lower prices, higher quality service and greater innovation.”

In regards to mandated Mobile Virtual Network Operator (MVNO) access, the Bureau says it “may be a warranted next step, there are both potential benefits and potential risks of regulatory intervention.”

“Further information is needed to assess whether mandated MVNO access, or the implementation of additional strategies to eliminate the remaining barriers to entry in Canadian wireless markets and stimulate facilities based competition, is the preferable approach,” concludes the report’s findings.

Rogers, Telus and Bell also submitted their interventions to the CRTC regarding the latter’s wireless review. While incumbents argued against MVNO access, citing their high capital investments into their own networks, Bell asked the CRTC to allow for longer contract lengths, to stretch out the amortization of today’s expensive premium smartphones (via MobileSyrup), which would lead to ‘lower’ monthly costs.

Earlier today, Andy Kaplan-Myrth, TekSavvy’s VP, Regulatory and Carrier Affairs, said in a statement to iPhone in Canada, “we’re calling on the CRTC to take practical steps that we know will create real competition and serve consumers interests by mandating a “Full MVNO” regulatory model, and setting fair wholesale rates and terms.”

If you want to lower your cellphone bill, buy a phone outright and avoid contracts. Get onto a monthly bring-your-own-device (BYOD) plan and just keep jumping from carrier to carrier, as new promotional plans pop up throughout the year.

What do you think needs to be done to lower wireless pricing in Canada?