The federal government issued an update today on its goal to lower wireless pricing by 25% over the next two years.

Innovation, Science and Economic Development Canada (ISED) today released its first set of wireless pricing data for plans in the 2GB to 6GB range, dated from February to June 2020.

The government says Rogers, Telus, Bell and their flanker brands “will be expected to offer plans in the 2 GB to 6 GB range that are 25 percent cheaper.”

“Our government is optimistic that it can continue working with the big three providers to reduce the cost of mid-range wireless services by 25 percent over the next two years. The tracker launched today will help monitor progress toward this goal, “ said Navdeep Bains, Minister of Innovation, Science and Industry.

Below is data for price tracking for British Columbia from ISED’s website, for example: 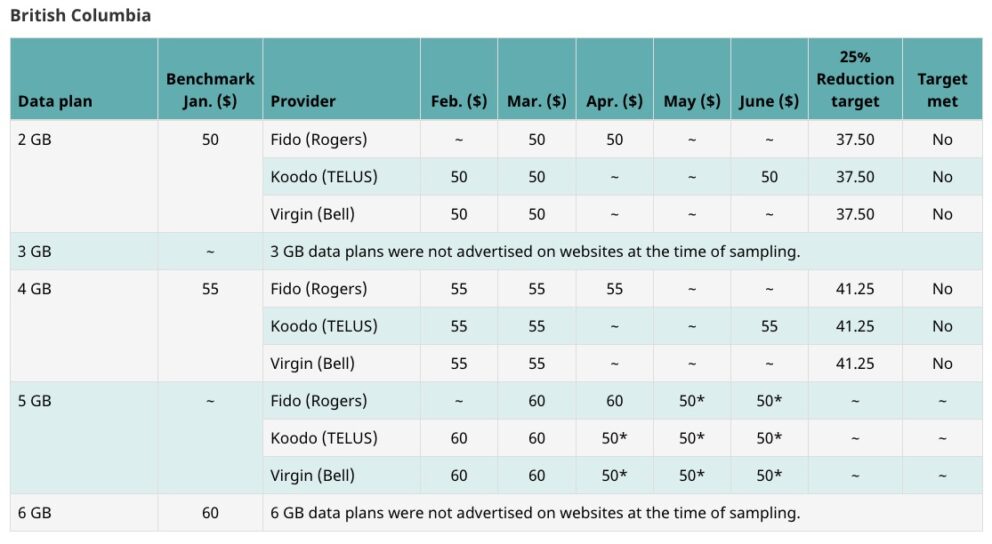 As you can see in the charts, “6 GB data plans were not advertised on websites at the time of sampling.” Most likely the ‘Big 3’ will unveil 6GB plans with a price reduction at the last minute to meet government-mandated price reductions.

Ottawa says Canadians used on average 2.5GB of data in 2018. The government says the “benchmark price” which it wants to see the 25% price drop, “is based on prices advertised on company websites in early 2020 for post-paid, bring your own device (BYOD), unlimited talk and text 4G/LTE plans in the 2 GB to 6 GB range.”

The government noted in Quebec, prices for plans in this range “were already lower than the January 2020 benchmark prices.”