Fido has launched a promo to offer customers 1GB of free data, as it nears its 20th birthday. The company says it will give away “millions of free data” to Fido customers nationwide, plus other gifts over the next few months.

Here’s how to get your 1GB of free data, if you’re a postpaid customer: 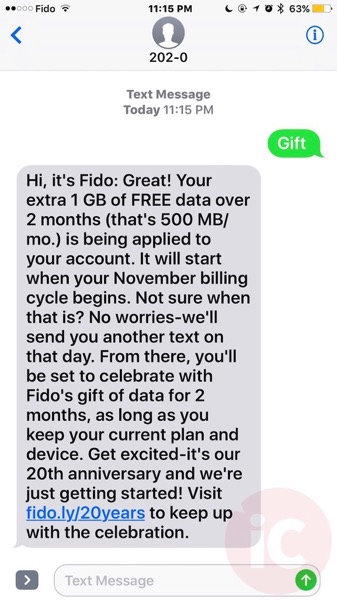 Nancy Audette, Vice President, Fido Wireless, told iPhone in Canada in a statement “As Fido’s 20th Anniversary approaches, we wanted to show our customers our appreciation by offering them 1 GB of free data along with other freebies and contests over the next few months,” adding “We have amazing loyal customers, some of which have been with us for the full 20 years, so we really wanted to show the love as part of our birthday celebrations.”

Fido launched in Canada back in April, 1997, as the first carrier to debut a GSM network, while also being first to launch a pre-paid service the following year. In 2004, Rogers acquired Fido.

Let us know if you’re going to jump on this! Free data? We’ll take it!

Update: Here are a couple ads just posted by Fido regarding this promo: