Fido has launched a promotion targeting customers of Shaw’s Freedom Mobile to switch over to the Rogers-owned company.

According to a Rogers internal memo shared on RFD, a promo started on September 22 offering $11 off per month for 24 months, on plans $50 and higher, if Freedom Mobile customers switched over to Fido. 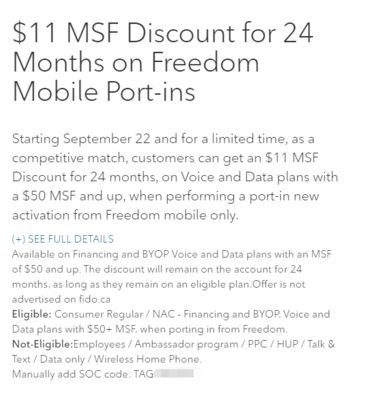 The deal offers the following discounts and extras on the Fido $50/9GB BYOD plan:

This switcher offer is available at all Fido stores and dealers that sell Fido plans, such as Best Buy, Costco Wireless, Walmart, Tbooth, Wireless Wave, The Mobile Shop and more. Some stores called by RFD said they were unaware of this promo, so your mileage may vary. You can also try calling over the phone for this promo plan.

Let us know if you’re able to switch over to this Fido promo plan if you’re a Freedom Mobile customer.

Image via RFD Rogers and Fido appear to be offering up another 5GB of free data, but for 18 months. That’s according to Fido customers that shared screenshots of the text messages sent out by the wireless carrier on Wednesday. According to the text message, Fido says this exclusive gift is a thank you for […]
Gary Ng
3 hours ago