If you’re a customer of Rogers-owned Fido, you may want to check your My Account section online, as there appear to be some targeted promo plans being offered right now.

Fido.ca only offers up to 10GB data plans, so these promo offers will provide more data than what’s publicly available. 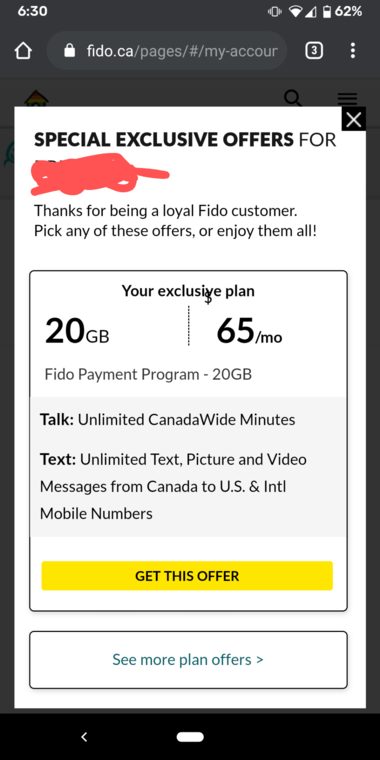 These plans include unlimited Canada-wide minutes and international SMS/MMS.

To see if you have some of these targeted promo plans above, log into your My Account online and head over to “See More Plan Offers” and these should show up if your account is being targeted. The website will say, “Special exclusive offers for ____” and add, “thanks for being a loyal Fido customer. Pick any of these offers, or enjoy them all!”

Back in June, Fido offered its customers a free 5GB data bonus within their My Account.

Rogers's President of Integration, Dean Prevost, accidentally revealed during a Competition Tribunal hearing against Canada's Competition Bureau on Thursday that he is set to receive a $2 million bonus if the company's proposed $26 billion acquisition of Shaw Communications goes through — reports the Hanna Herald. This figure had previously been confidential but slipped out...
Nehal Malik
4 hours ago

Image via RFD user ‘h2o-‘ Rogers-owned Fido is offering up an in-store Black Friday and Cyber Monday deal for 2022, in the form of a $30GB plan with 20GB of data for new customers. This plan is supposed to debut on Friday, November 25, but some stores have started to offer it early. This plan […]
Gary Ng
5 hours ago

Shaw Communications CEO Bradley Shaw told the Competition Tribunal on Wednesday that it was "extremely difficult" for the Shaw family to give up the business and agree to Rogers's proposed $26 billion takeover of the company (via Financial Post). Canada's fourth-largest telecom operator has been a family affair since its inception. Bradley Shaw took over as...
Nehal Malik
8 hours ago