The text message says to sign up, all users have to do is “simply turn data roaming ON!” (these almost sound like famous last words leading up to a massive data roaming bill)

But don’t worry just yet, as Fido says they’ll be sending free data usage alerts along the way, especially if you’re near the 50MB data limit, “so go ahead and surf away.” 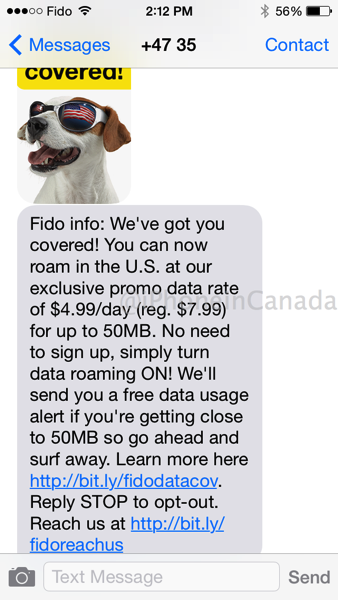 Fido followed Rogers last year to announce their new U.S. data roaming option of $7.99 per day for up to 50MB of data. If you’re desperate for data, this Fido ‘exclusive promo data rate’ might be an option for you, but 50MB is not a lot so don’t expect it to last very long if you’re doing heavy browsing.

If you have an unlocked iPhone or smartphone, you’re better off going with Roam Mobility, as $3.95 per day you can get 300MB of 4G LTE data, unlimited EDGE data, along with unlimited nationwide talk, global SMS/MMS, long distance calls back to Canada, plus hotspot tethering. But of course, coverage depends on where you’ll be visiting.

Image via RFD Rogers and Fido appear to be offering up another 5GB of free data, but for 18 months. That’s according to Fido customers that shared screenshots of the text messages sent out by the wireless carrier on Wednesday. According to the text message, Fido says this exclusive gift is a thank you for […]
Gary Ng
5 hours ago