Fido has launched some new Xtra offers within its mobile app for existing customers. This week’s perks include a 3GB data offer for $10, plus a free David’s Tea lemonade.

The data offer is titled “FIDO DATA FLASH SALE”, and up for grabs is the ability to add 3GB data for only $10 per month, to your existing plan, “while quantities last.” 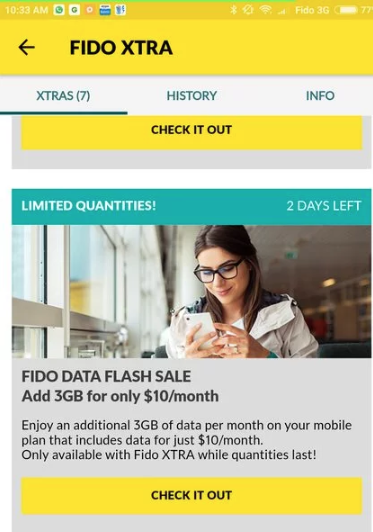 Users who are seeing this data offer, once redeemed, will receive an SMS confirmation once the 3GB data is added to their account “on your next bill cycle after October 18th.”

Another Fido Xtra perk is the offer of one free Magic Potion Lemonade Tea, either hot or cold. This offer is available from October 11-14 and is valid for a 16oz size. Users are told to show the cashier the Fido Xtra screen to redeem for the freebie.

Let us know if you’re seeing either of these perks in your Fido iOS app.