With the upcoming iPhone release from both Telus and Bell, I thought it would be interesting to take a look at the network coverage provided by all the carriers in Canada.

As many know, Telus and Bell are launching HSPA+ networks, a complete departure from their existing CDMA networks. The new network technology also puts them at par with Rogers/Fido. The new Telus/Bell network offerings have been a strong point of conversation from Canadians as many worry that since the network is brand new, it may not be as reliable as, for example, the established Rogers/Fido network.

While company coverage maps are by no means meant to measure actual network coverage, since often times they are not entirely accurate, the maps are the best resource customers and observers have.

With that being said, let’s take a look at the various coverage offered by the four iPhone carriers in Canada.

Below are the new Telus HSPA+ coverage maps for Western and Eastern Canada. While the coverage looks quite good overall, the map is not very meaningful on its own. (Click images to enlarge). 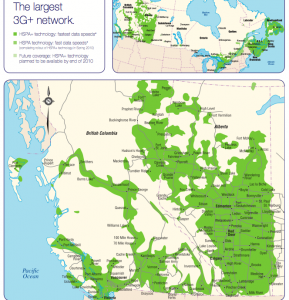 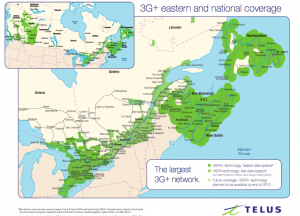 If we compare the Telus coverage to Bell (link here), both companies offer almost identical coverage across Canada. Also, using the above Telus map as an indicator for Bell would be appropriate since the two companies are building the upcoming HSPA+ networks together.

What this means for existing or new Telus/Bell customers is, according to the maps, the same coverage customers experience today seems to be available for the new networks as well, just faster due to the HSPA+ technologies. I’d say that’s good news.

Looking at the Rogers (link here)/Fido coverage map below, initially it seems as if Rogers, Telus, and Bell are on an even playing field, but upon closer inspection, there are differences. (Click image to enlarge).

Between Rogers, Telus, and Bell, the two latter companies offer more coverage in more areas. For an obvious example, look at Newfoundland. The Rogers/Fido coverage is almost bare but Telus/Bell coverage is plentiful. While the additional areas that are covered by Telus/Bell are not overly significant from Rogers/Fido, that coverage will make a difference to customers in those areas who may have wanted an iPhone but could not get it due to poor cellular coverage.

But then returns the argument of just how reliable the new Telus and Bell networks will be against the established Rogers/Fido. While all four networks provide good coverage, with Bell and Telus providing more across Canada than Rogers/Fido, the quality of the networks will be the true test.

Once the new networks go live and become increasingly established, the true conclusions of quality will appear. But as it stands now, at least when comparing coverage maps, it would seem that Telus/Bell have the upper hand.