Rogers and CIBC to Launch ‘suretap’ for NFC Payments This Month

Now, MobileSyrup has gotten their hands on an internal doc that reveals the name of this upcoming system, dubbed as “suretap”. The system is for Rogers customers only and will support the BlackBerry Bold 9900 and Curve 9360 only at launch, with more devices coming soon. 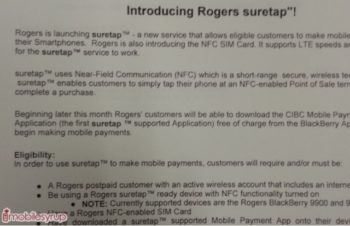 To use “suretap” customers are required to purchase the NFC SIM card, which has a suggested retail price of $12.99 (existing customers with ‘suretap’ supported phones will be issued NFC SIM cards). Next, customers will need to download the CIBC Mobile Payment app from the BlackBerry App World, which will download their credit card info via the app.

There’s no word whether you this is only available to CIBC customers only or not, or whether future iOS support will be offered. It’ll be interesting to see how quickly this will be adopted once it rolls out, apparently on October 15th according to CrackBerry.

Who would be keen on giving this a try?