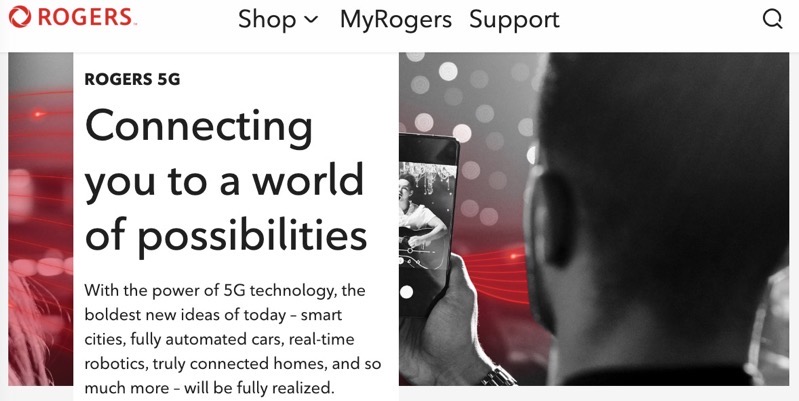 Rogers this morning announced it had officially flicked the switch on its 5G network, going live in downtown Vancouver, Toronto, Ottawa and Montreal, for Samsung Galaxy S20 5G devices.

To access the Rogers 5G network, you need to be on consumer or business Infinite plan. The current 5G network uses the 2.5 GHz spectrum, while a second phase will see 600 MHz 5G spectrum added. In the future, 3.5 GHz spectrum coupled with dynamic spectrum sharing will allow the company’s 4G network to be used for 5G.

Yesterday, the federal government announced rules for the 3.5 GHz spectrum auction, set to take place this year (it includes set aside reserved for regional players).

Will Rogers charge extra for 5G network access? The answer is yes, starting in March of next year. It’s worth highlighting today’s press release mentions, “these 5G-ready plans come with 5G access included, a $15 per month value, at no extra charge until March 6, 2021.”

This means anyone on an Infinite plan opting to use 5G will see a $15 per month increase starting one year from today and access will not be free.

There aren’t many 5G smartphones available right now, with the Galaxy S20 5G series the first in Canada on Rogers right now. But when Apple launches new iPhones this fall, they are expected to support 5G. Come next spring, if you’re on an Infinite plan and want to continue using 5G networks, you’ll have to pay an extra $15 per month.

If Infinite plans remain at the same price in one year, this is what they will look like with a $15/month increase for 5G access:

If Rogers is implementing a 5G network charge, it may be likely rivals Telus and Bell will follow suit with similar charges as well, when their 5G networks go live (just look at how activation fees keep matching each other).

The Trudeau government yesterday revealed its plans to lower wireless prices by 25 percent in two years, but only for data plans between 2GB to 6GB. Unlimited data plans and higher data buckets needed for faster 5G networks aren’t included in that cost-cutting measure.

Are you ready to pay $15/month extra to access the Rogers 5G network?

Update March 6: When asked why the company will charge customers to access 5G networks next year, a Rogers spokesperson told iPhone in Canada, “As the technology develops and we continue to build out our 5G network, we are giving customers access to 5G service at no extra cost for one year so they can test it out. Customers can choose if they want to sign-up for 5G service at that time.”