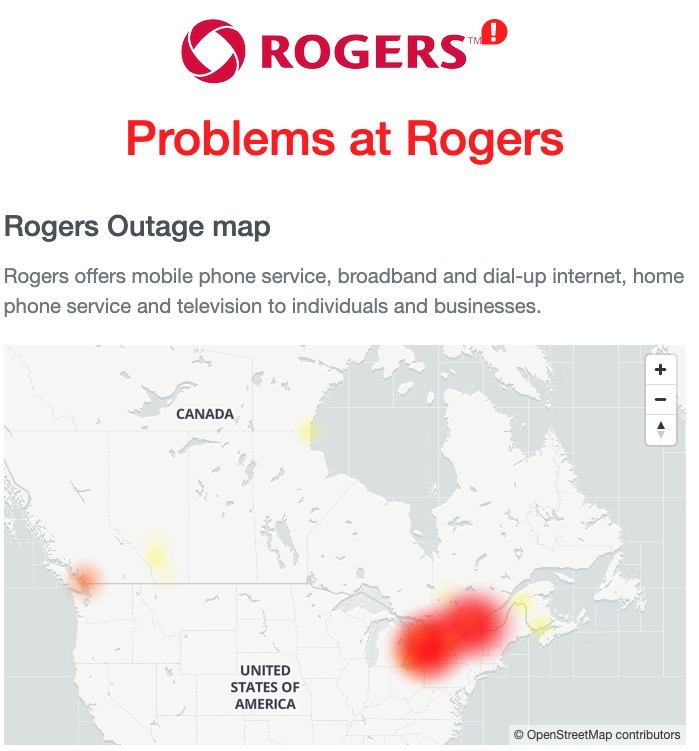 Aside from intermittent dropped and failed calls on the Rogers and Fido network, some customers are also seeing internet outages in Ontario from both companies today.

Outages are being reported in Toronto, Brampton, Montreal, Ottawa, Kitchener, Mississauga, Scarborough, Hamilton and Markham for example, according to DownDetector.

@RogersHelps the Rogers internet is down since morning for my broadband connection! Can u let me know wen the network will be up again,? In Toronto

@FidoSolutions I need my internet back. I'm working from home and it's been out for 5 hours now. They wont even give me a credit to my account

Rogers and Fido customers are saying they’ve had outages since 10AM local time. The issue is frustrating as many are working and learning from home and without internet, staying connected is not possible.

The outage is also affecting Carry Telecom customers, which are on the Rogers network:

Dear Carrytel Customers, due to a technical failure, our Rogers network is down. The issue has been reported to Rogers and a master ticket is open. Hopefully they will help to fix it ASAP. The connection will be back soon. Sorry about the inconvenience.

According to the Rogers Community Forums, they’re telling customers the outage is being caused by “a damaged fibre caused by a third-party contractor in the below area.”

“Our teams are aware and already hard at work to get your services back up and running as soon as possible. We know how important it is to stay connected and are sorry for the interruption,” says Rogers.

Are you dealing with an internet outage right now from Rogers and Fido?

Update April 1, 4:11PM: According to Carry Telecom, the internet outage won’t be fixed until Thursday morning at 2-3AM EDT:

2/2
A decision has been made to defer further work to an emergency activity starting at midnight.