Today is the iPhone 3G S launch day in Canada and the USA. Rogers late last night dropped the bomb we were all waiting for–they finally released iPhone 3G S upgrade pricing (Fido too). Now, I don’t understand the rationale of keeping this information till the last minute. Is it to keep their employees and customers confused for today?

Imagine if you are a Rogers employee on the Eastcoast, only to show up to work in the morning with all this last minute info. Have fun passing it on to customers!

Anyways, I thought it would be handy to come up with some helpful tips (click here for last year’s preparation) on finding your hands on an iPhone 3G S, and some other thoughts to consider during today’s iPhone frenzy.

How to Get your Hands on the iPhone 3G S Today…

– Don’t forget the UltraSn0w 3G unlock should be released today (QuickPwn/PwnageTool has been delayed)
– order your iPhone 3G S online and save $19 (still savings right? hehe)
– TweetDeck iPhone App (use twitter to send out tomorrow’s launch info)
– wake up early, and head to your nearest Rogers Wireless dealer and get in line.
– keep the kids home from school, so they can be your little iPhone 3G S helpers. Explain to them the definition of the word “monopoly”.
– Apple Stores open at 8am, if you haven’t made an appointment, they are probably fully booked.
– Also try Future Shop, Best Buy, Wireless Wave, and even the cellphone kiosk at Costco.

Should I Sign on for an Extra Year to Get Discount iPhone 3G S Pricing?

Well, what do you think? Is it worth it to extend your existing 3 year contract (for those who bought the 3G on July 11th last year; you are almost 1 year in) to benefit from the discount pricing? The reason this is worth pondering is because this Fall, new GSM competition will be appearing (Telus/Bell setting up GSM for 2010 Olympics?). I will be jumping on my wife’s HUP to get the iPhone 3G S on contract free pricing. I am planning my eventual move away from Rogers in the future, and will not bite on their current upgrade pricing “promo”.

With all these contract extensions for discounts, it looks like my Rogers Lifetime Contract post isn’t that far off, eh? 🙂 With each new iPhone, customers will continue to extend their contracts for discounts on hardware. Heck, forget the small talk and let’s just jump right into the lifetime contract. Rogers should give free phones for life, and tattoo your monthly plan details to your chest. Waddaya think? 😉

Did you Buy the iPhone 3G S Today? Success? Failure?

So, if you upgraded to the iPhone 3G S, let’s hear your story. Where did you buy it? What did it cost you? Funny stories? 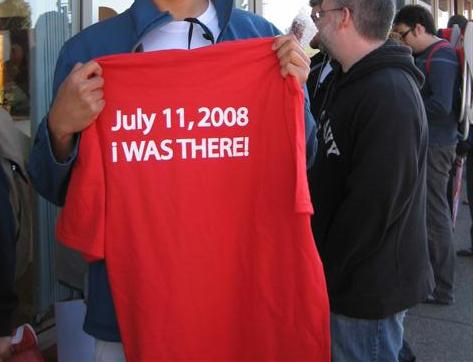