Rogers has revealed their two-year contract pricing for the 4-inch iPhone SE, and it’s cheaper than we had anticipated. The 16GB model starts at $99.99, while the 64GB version is $229.99, both on contract, as seen below: 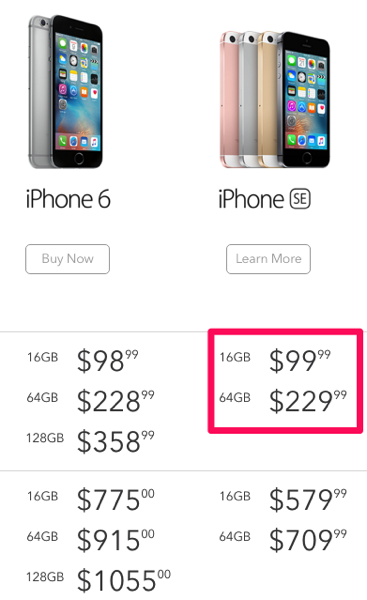 Outright pricing remains pretty much the same as Apple.ca, as expected.

You’ll notice the 16GB and 64GB prices right now are identical to the iPhone 6, which has a larger 4.7-inch display, but lacks the latest iPhone 6s hardware found within the iPhone SE. Customers will now have to make a choice.

As for TELUS and Bell, no prices have been revealed just yet, but stay tuned. iPhone SE pre-orders kick off on Friday, March 24, so we’ll most likely find out in the next few days.

What do you think about paying $99.99 for the iPhone SE on contract (and most likely with a minimum $80/month plan)?

Update: Fido has listed on their website the iPhone SE is “coming soon”.